All summers occur fires in forests around the world, including those that devastate large masses of conifers Y birch trees in the northernmost regions of our planet. In these latitudes, fire is caused mainly by lightning and human activity, but an international team of researchers has identified for the first time another cause: ‘zombie’ fires that hibernate underground and ‘resurrect’ in spring.

These fires penetrate the peaty soil of the forests of Alaska and northern Canada, remaining all winter in a deep combustion phase, to ‘resurrect’ later in spring

Its origin is in the embers of previous fires, which do not completely extinguish the fire brigades or the rain. The fire penetrates the thick organic layer that makes up the peaty soil of the boreal forests, remaining all winter in the combustion phase at great depth.

This is confirmed this week in the journal Nature by scientists from the Free University of Amsterdam (VU Netherlands) and local experts from Alaska. Zombie fires had already been observed in this US state and in Canada, but until now a systematic study had not been carried out.

“These smoldering fires they are very difficult to put out and, in addition, the layer of snow gives them additional protection against adverse winter conditions (outside it can be up to 40 degrees below 0) ”, the first author explains to SINC, Rebecca scholten of the VU, “and as soon as the snow melts, they find dry fuel again and can turn back into a wildfire with great flames.”

Scholten and his colleagues have developed a algorithm to identify ‘zombie’ fires recorded in Alaska and the Northwest Territories of Canada between 2002 and 2018. “Our study is based on satellite images and on actual confirmed winter fire data, provided by fire managers on the terrain”, Points out Scholten.

The area burned by the ‘zombie’ fires varied over the years, but in some the percentage rose to 38%, according to data collected on the ground and by satellites, then analyzed with an algorithm

“Basically,” he adds, “we are looking for a fire that starts near a burned scar from the previous year (spreading very slowly), which starts early in the season (they can appear as soon as dry fuel is available and before the rest of the fires) and we verified that it was not ignited by lightning or human activity using a lightning detection network, the location of human settlements and various infrastructures ”.

Following these criteria and with the help of the algorithm, the authors have identified that the ‘zombie’ fires were responsible for 0.8% of the total area burned during the study period, although the surface varied over the years and in some of them the percentage rose to 38%.

Three phases of a ‘zombie’ fire in Alaska: fire apparently extinguished at the end of the fire season in 2015 (left), a fire scar covered with snow during winter (center), and the ‘zombie’ fire emerges again during the spring of 2016 (right). / Carl Churchill, Woodwell Climate Research Center

Researchers have also found that smoldering fires are more prevalent after a year with many fires and after warmer summers. This suggests that the increase in temperatures caused by the global warming it favors that they go deeper into the organic soil, which, in turn, helps maintain them during the winter.

More ‘zombie’ fires occur after a year with many fires or warmer summers, suggesting that global warming may favor them

“Both summer temperatures and burned surface are increasing with global warming in large areas of northern North America,” warns Scholten, who with his colleagues is investigating whether the phenomenon also occurs on other continents: “Probably many of the conclusions can also be applied to Eurasia, that is, the type of places that favor these fires, that there are more after hot summers and years of big fires, and the operation of the hibernation mechanism itself ”.

Although ‘zombie’ fires are relatively rare in the boreal forestsAs climate change raises temperatures, they may become increasingly common, the authors conclude. In addition, they highlight how important it can be for forestry agencies to use tools that help to predict where and when they will appear, which will facilitate its rapid extinction, reducing carbon emissions and costs in the fight against fire.

Randi Jandt, a fire ecologist at the University of Alaska and co-author of the study, told SINC the story that her husband, Jon Larson, remembered this week having lunch at home. Larson, now retired, worked much of his life in the fire brigades, including 17 years as a smokejumper, a type of paratrooper forest firefighter who accesses the most remote burning forests by plane.

“It was the middle of May 1996, too early for a fire in the interior of Alaska. Lightning season wouldn’t begin until June, and the snow was still clinging to the northern slopes and under some canopies. With over 20 years of firefighting experience, Jon knew this fire was going to be troublesome. Since it had been burning on the ground all winter, it was going to be very difficult to extinguish, and there would be deep ash pits to deal with. 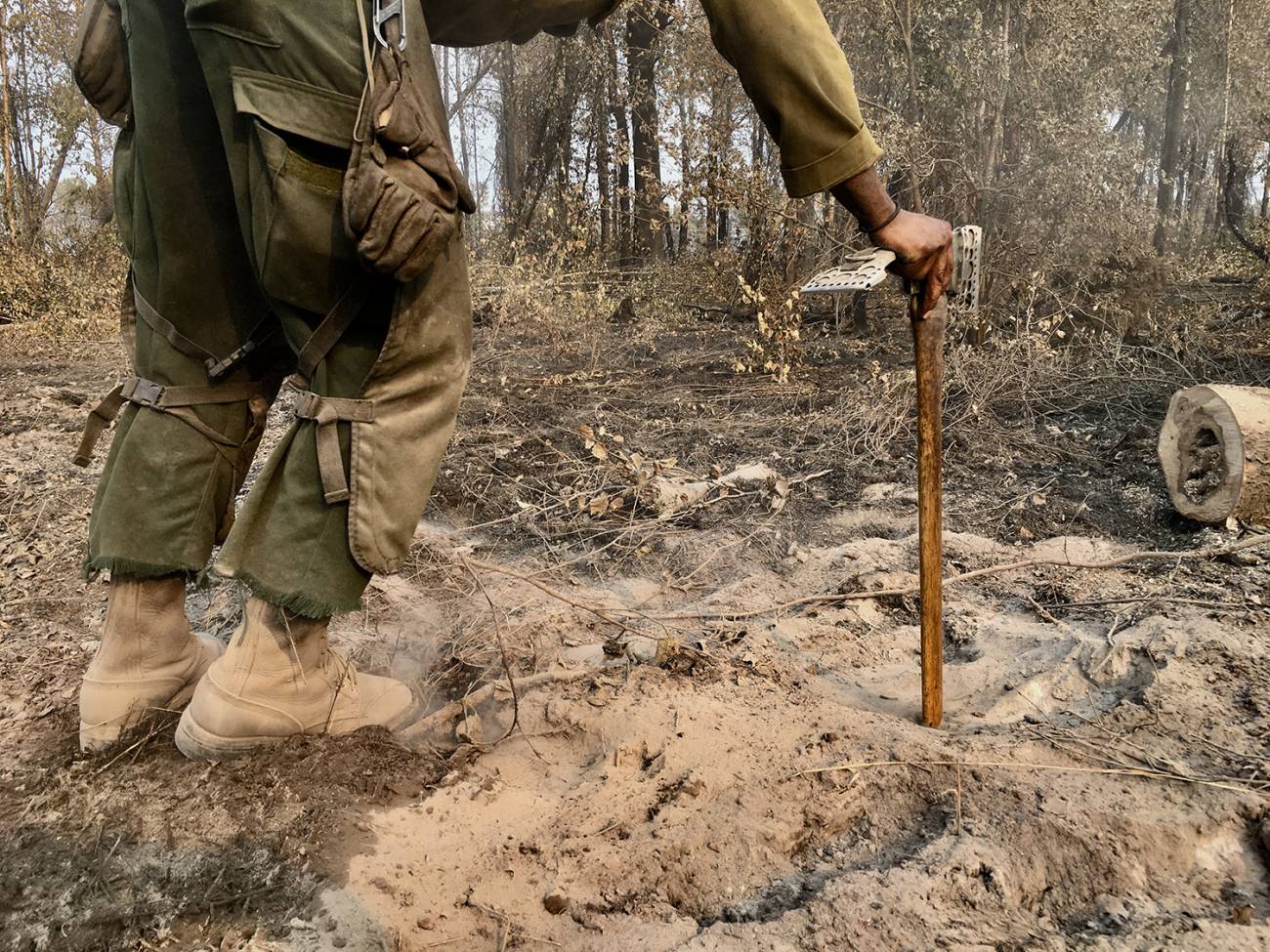 Ash pits in the 2019 McKinley, Alaska fire, deep enough to injure firefighters. The fire continued through the winter in a couple of spots. / Renette Saba, Alaska Department of Forestry

The spotter (observer who directs the pilot and time each jumper from the plane) held up four fingers, which meant there were only 4 smokejumpers (which equates to half a charge, typical for a relatively small fire, about an acre ). Jon answered with 8 fingers: give us the full load !, but unfortunately only the four jumpers left through the door.

It was a scene very similar to the Yukon Flats fire of 2005, where the fire burned under the stands of birch and fir trees along the river. Also now he had felled the trees that were used as fuel for the new fire. This one was actually bigger than it looked: the fingers of fire had spread underground, even though the surface didn’t look burned!

Yukon Flats fire of 2005, where the smoldering fire burned the ground that anchored the trees and toppled those in the center (left), and looks like burned forest floor, with the thick organic layer, about 25 cm thick, partially consumed. / Randi Jandt

They had to use chainsaws and cut down the trees above the smoking ash pits and burn them to take fuel from the fire. You had to be very careful not to step on one of those looming ash pits – superheated ash (as well as steam from the water spray) could instantly cause severe burns. They used a bomb (dropped by parachute) into the creek, and flooded the ash pits with water until finally there was no more smoke. This took four days.

Even then, Jon warned Paige (the young smokejumper designated as the leader of this fire) not to call the fire out, because he knew they probably hadn’t seen its end. But they were required elsewhere, so the brigade of four reluctantly left on other missions.

Return of the Damien Fire

A month later, wisps of smoke appeared again, and poor Paige was credited with a jumper re-burn (a kind of reprimand) despite her hard work and that she really hadn’t been to blame. This time the Alaska Fire Service had to send more paratroopers and eventually helicopter brigades to put an end to this ‘zombie’ fire they called Damien. “

Rod Dow, another retired smokejumper who was involved in its extinction, adds: “I was in the same fire in the second round. We jumped four (Thompson, Tenneson, Raudenbush and myself), and it had grown to 6.66 acres. That number 666 and the difficulty of putting it out was part of the reason we named him Damien. A sturdy fir tree had fallen into a foot-deep pit of simmering ash, and we had to cut a line around it, cool a place to get close, and saw to it. the fall.

We then use the pumps to cool a larger area and more saw work. Between the four of us and the Midnight Suns (a 20-person crew from Alaska), we ran eight saws and six nozzles continuously for over a week. We cleared the entire area, piled it up into about 60 piles, and burned it. When we finished it looked like a huge garden. In my 46-year career, it was the fire in which I have done the most work per hectare. “