A few months have already passed since the presentation, last October, of Minecraft 1.17 Caves & Cliffs, the long-awaited new big update to Mojang’s best seller. A month later, at the beginning of November, the snapshot 20w45A was released, the first to start incorporating some of the novelties that will arrive with Minecraft 1.17, and which already allowed us to test some new materials, such as the expected copper and amethyst. , and new craftable items like the telescope, candles, and bundles.

Although with the successive snapshots we have been receiving some news, the most anticipated of Minecraft 1.17 by the community continued to be expected. I speak, of course, of the new caves and all that they will bring as novelty. And it is that, as we already intuited in the presentation, and we are seeing more and more clearly, although the name of this update is caves and precipices, it seems that the bulk of the news will take place in the bowels of the earth, not in the peaks mountainous.

A little less than two weeks ago, Mojang released snapshot 21w06a, and with it finally debuted the new cave generator, a key element, since it is about the “constructions” of the same on which many of the novelties of Minecraft 1.17 will be deployed. Y just a few days ago, version 21w07a debuted, in which some of the errors detected have been polished, in addition to applying certain improvements. Thus, although with 06 it was still a bit early, 07a does already pose very interesting scenarios to start exploring the caves created by the generator.

A very important aspect is that for now we are talking about the part responsible for defining the basic elements of the new caves, but You still won’t be able to find all the materials, creatures and biomes provided there. These will arrive between the next few weeks and the next few months. Still, it is already very interesting to start digging deep, and see the first sketch of those gigantic and shocking caves that Lady Agnes told us about at the Minecon last year. And in doing so you will discover one of the interesting surprises in Minecraft 1.17. 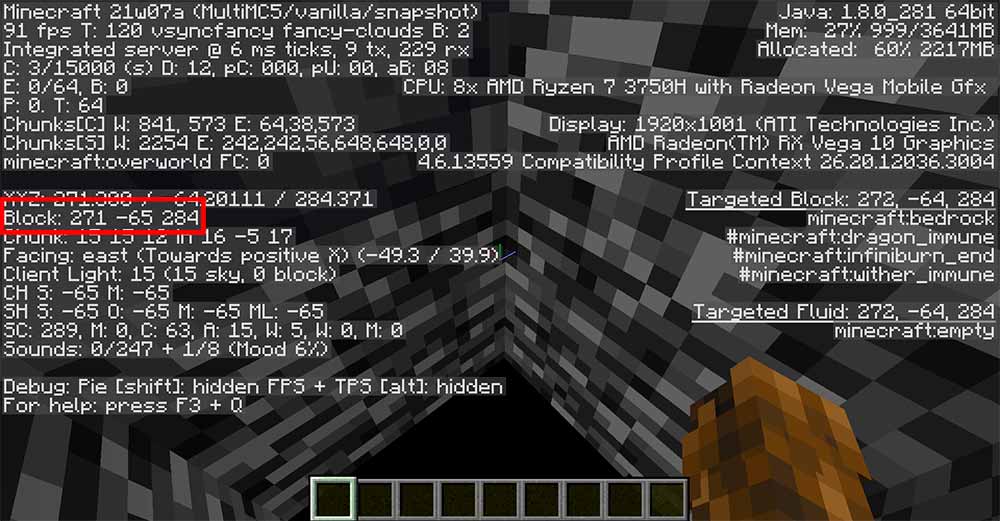 Do you see something that catches your attention in the image above? In the coordinates? Yes, indeed, I am talking about the Y coordinate is that, as you can see, now the base bedrock is no longer around 0, but -64In other words, Minecraft 1.17 maps will be 64 more blocks deep. Something that, of course, will lead to a change in the distribution of the most sought after blocks. In just five minutes of testing, I found diamond in layer -12. In addition, in the lower layers we will also find Grimstone, a new material that also allows making tools.

As I said before, we will still have to wait to see the new biomes, swim with the axolotls and, of course, face the fearsome guardian. If these are the novelties you want to try, you will still have to wait a while. However, if you are interested in my personal opinion, explore the new bowels of the earth Now it allows us to start enjoying what Minecraft 1.17 will offer us, and it is well worth it. If you want to know how to install the snapshot, here we tell you how you can test the Minecraft betas.