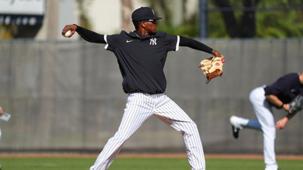 The Yankees added four players, three of them Dominicans, to their 40-man roster, protecting national team players in the Dec. 10 Rule 5 Draft.

Right-handed pitchers Roansy Contreras, Yoendrys Gomez, Alexander Vizcaino, all from the Dominican Republic, together with the Venezuelan field player Oswald Peraza, all of whom signed as international free agents in 2016, would have been eligible to be included in the Rule 5 Draft by any team had they not been added. to the 40-man list before Friday’s deadline.

Of course, all four players have been out of action since 2019 following the cancellation of the 2020 minor league baseball season.

Contreras, 21, a native of Peralvillo, Monte Plata province, had an excellent season with Single-A Charleston in 2019, leading both the Yankees organization and the South Atlantic league with 12 wins. He posted a 12-5 record with a 3.33 ERA and struck out 113 batters in 132 1/3 innings. MLBPipeline.com ranks Contreras as the team’s 19th prospect.

Gomez, 21, a native of the community of Nigua, San Cristóbal, split his time in 2019 between rookie-level Pulaski and Charleston Single-A. He was 4-5 with a 3.99 ERA, striking out 53 batters in 56 1/3 innings. Both Baseball America and MLBPipeline.com list Gomez as the organization’s ninth prospect.

Vizcaino, 23, also a native of San Cristóbal, appeared in three spring training games for the Yankees in 2020 and spent the season at the team’s alternate site. In 21 starts between Single-A Charleston and Single-A Tampa in 2019, he was 6-6 with a 4.38 ERA, with 128 strikeouts in 115 innings. Vizcaino is ranked the team’s No. 8 prospect by both Baseball America and MLBPipeline.com.

Peraza, 20, of the Venezuelan city of Barquisimeto, played in both the Staten Island short season and Single-A Charleston in 2019 and hit .263 with four home runs, 20 RBIs and 23 stolen bases. His 23 steals were the third most among Yankees minor leaguers. Baseball America lists Peraza as the No. 6 prospect in the organization, while MLBPipeline.com ranks him as the No. 4 prospect.