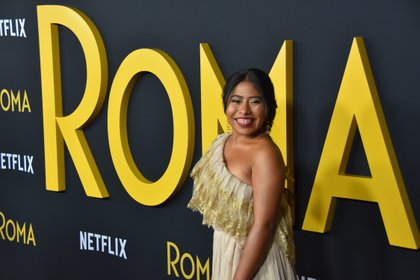 The actress Yalitza Aparicio participates in the launch of the film “” Roma “”, at the Egyptian Theater in Hollywood (USA). . / Iván Mejía / Archive

Mexico, Nov 17 . .- Yalitza Aparicio, who will be one of the presenters of the Latin Grammy gala this Thursday, was very excited about her first time as a presenter and assured that, although she likes many musical genres, when she’s alone, she’s more like reggaeton.
“I am of all types of music, depending on the party. To be alone I am a reggaeton, because it makes me happy and I can enjoy my activities without it costing me,” she explained at a press conference.
At the Latin music party, Aparicio will share the screen with artists who are on everyone’s lips such as Bad Bunny, J Balvin, Ricky Martin or Anitta, musicians he admires and with whom he would be delighted to take a photo, but he confessed that he has one favorite.
“I have many favorites, I commented to the team that as a fan I would take photos with everyone, but one of the people that I am most excited to hear is Karol G. I am a fan of his songs,” he explained.
For the Mexican, this is an opportunity to train and learn in a field that she had never explored before but for which she is taking the advice of those who will be her companions at the awards ceremony: Carlos Rivera and Ana Brenda Contreras.
“I have been watching videos of different events where they do this type of thing, I try to ask people who have already done it and my colleagues and solve my doubts in general. Knowing all those things will help me relax,” he said.
In addition, facing her first time as a presenter at an event of the magnitude of the Latin Grammy does not seem to scare her, but rather, she said, it is stimulating and she faces it aware of what she has achieved so far.
“For me as an actress it is incredible to have another opportunity to experience more and learn about other capacities that I may have. Before I did not even speak before the cameras, it also implies opening my eyes to the rest of the world and that they see that there are these opportunities. I will give everything I have, “he said.
In 2019, the Mexican of indigenous descent was nominated for her role in Alfonso Cuarón’s film “Roma” (2018), whose character, Cleo, a nanny who took care of the children of a middle-class family, went around the world and it encouraged the film industry and the public to open the doors to diversity a little more.
After the success of the film, Aparicio embarked on multiple projects and became the first woman of indigenous descent to appear on the front page of Vogue, among other magazines, as well as participating in conferences on equality and signing as a columnist in the New York Times.
In all these experiences, she seeks to draw the path so that other young people who come after do not have to suffer what she and many before suffered and know that they can achieve their goals.
“I feel very happy with my appointments and projects. The important thing is to always walk, keep your head up, giving your best effort. I don’t want the person who is going to get to this point going through the things I went through, such as discrimination , bad comments or distrust, “he detailed.
However, despite the hundreds of experiences that she has been able to live since 2018 and those to come, the Mexican assured that she will never stop being a teacher, a profession to which she dedicated before Cuarón selected her for his film. “
“I’m never going to give it up, because a teacher is someone who shares knowledge with others and is excited for someone to stand out. It will be what will always characterize me,” he finished.
The 21st edition of the Latin Grammy will be held on Thursday in virtual format due to the coronavirus pandemic, in a gala that will feature performances by Pitbull, Sebastián Yatra, Ricardo Montaner, Caliber 50, Bad Bunny, Pedro Capó , Alejandro Fernández, Karol G, Los Tigres del Norte, Christian Nodal and Marc Anthony, among others.
The event will be broadcast by the Hispanic network Univisión, Televisa and the cable channel TNT, and this year’s edition has the slogan “Music humanizes us.”