Wyoming took one of its special elixirs again at Intermission this Thursday that make it become any personality, both national and global, to become the president of the United States, Joe Biden.

“Welcome to ‘Face interviews’, today Joseph Robinette Biden Jr. is joining us”, announced Dani Mateo. While Wyoming-Biden pointed out that “I love Spain, I like Spain”.

After some jokes, the journalist stressed that he is the oldest president that the American country has had: “How are you feeling? Do you see yourself with the strength to finish the mandate?”asked the collaborator of the La Sexta program.

“Of course, my plan is to complete two full terms as president of the United States, and then, we’ll see …”Wyoming-Biden responded. “When he finishes he will be 86 years old …”, pointed out Mateo.

Wyoming-Biden stated that “I still do like Michael Jordan, I have a second career later like he did in baseball; or like Beckham, who left football and made a career as a underwear model. “

He also commented that in his first term, “I am not going to do anything, I leave that to the second. I will dedicate these first years to undo everything that Trump has done, we must clean up, as you Spaniards say “.

Yes indeed, “The first thing I want to undo the wall with Mexico, pick and shovel, until not a stone remains; then take back the nuclear deal with Iran, the Paris climate accord, reestablish the rights of immigrants, go back to the WHO and fix the White House pool, which Trump left full of Coca Cola. “

Then, Wyoming-Biden donned the famous Bernie Sanders mittens, who were the protagonists of his investiture: “They are very soft…”. He was so comfortable that he fell asleep, to the surprise of Mateo, who ended the interview. 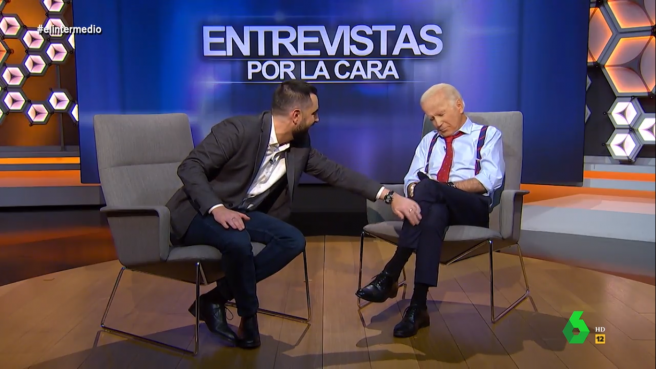