Zero hedge has published a very interesting reflection that I recommend reading in this article:

Reflect on how in these moments when we are all aware that almost all markets are very overgrown, we will not be approaching the Wyckoff distribution structures.

A few words before starting about his life, considering that he was one of the fathers of technical market analysis:

Richard Demille Wyckoff (November 2, 1873 – March 7, 1934) was an American stock investor and founder and former editor of Wall Street Magazine (which founded it in 1907). He was also editor of Stock Market Technique

Wyckoff implemented his methods of technical analysis of financial markets (the study of charts showing the movements of stock prices and other data). He increased his wealth to such an extent that he eventually owned nine and a half acres and a mansion adjacent to the Hamptons estate of General Motors President Alfred Sloan in Great Neck, New York.

As Wyckoff got richer, he also became altruistic about the public’s experience on Wall Street. He turned his attention and passion to education, teaching, and publishing exhibits such as “Bucket Shops and How to Avoid Them,” which ran in New York’s The Saturday Evening Post beginning in 1922.

Well, let’s go back to the Zerohedge.com article, simplifying a lot, because it is more complicated than this, this was its basic cycle: 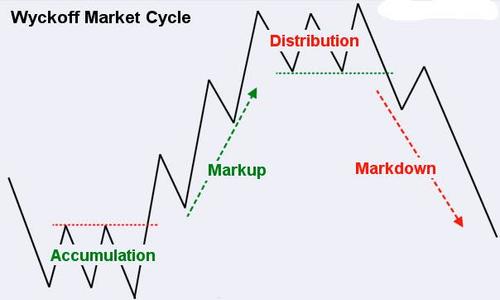 It is very possible that in many assets we are already immersed in this cycle, but I would highlight two curious graphs that the author comments, in Amazon and in bitcoin, for example:

This would be Amazon:

And this is the bitcoin:

Quite interesting, in any case it fits your cycle or not, I sincerely believe that we are in many assets starting with the SP 500 in the distribution phase one way or another. There are many indications. One of the most spectacular is the historical divergence of amplitude that is occurring in the index of all world stock exchanges that is around historical highs and see what collection of divergences: