Four-time world champion Gervonta “Tank” Davis showed off during a training session open to the press in Las Vegas just over two weeks after his fight against WBA Super Lightweight Champion Mario “El Azteca” Barrios, which will lead the SHOWTIME PPV on Saturday, June 26 from the award-winning State Farm Arena in Atlanta as part of a Premier Boxing Champions event.

Tickets for the evening at the State Farm Arena, promoted by Mayweather Promotions, GTD Promotions and TGB Promotions, are on sale now at ticketmaster.com.

Davis is one of boxing’s biggest stars today at just 26 years old, now moving up to 140 pounds for the first time in his career to try and add the super lightweight championship to his already stellar roster. A victory would give Davis three world titles in three different divisions at the same time, something that only a handful of boxers have achieved in all of boxing history, including Henry Armstrong and Canelo Alvarez.

This is what Davis, accompanied by his trainer Calvin Ford and Mayweather Promotions CEO Leonard Ellerbe, said Wednesday at the Mayweather Boxing Club: 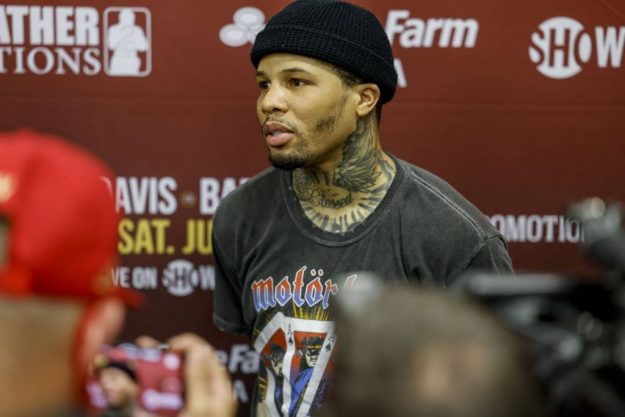 “I couldn’t tell you who’s going to hit the hardest until I step into the ring and put their power to the test. It doesn’t really matter who is stronger, I want to beat him in all aspects from end to end.

“People who are here in the gym see a lot of things that I don’t need to do, even in my fights. Floyd (Mayweather) always tells me to box and use my skills, not to constantly look for the knockout. This camp has allowed me to go back to that and let the knockout come alone.

“For me, greatness simply means taking no steps back. I want to keep going forward no matter what happens. It doesn’t matter who is in front of me, I just have to beat my opponent on duty. A lot of people don’t come from where I grew up, so I’m clearly doing something right. It doesn’t have to be an opponent, it could be something outside the ring. I always go in search of greatness.

“I just beat whoever they put in front of me. When the time comes, we will see who is the best. Until then, I don’t need to talk about any other fighter other than the one in front of me.

“Barrios and I went through the amateur circuit at the same time. He knows what I’ve been doing. How crazy life is sometimes, right?

“I am someone who works as a team, so I apply myself to the full in everything that my team recommends to improve. That’s what has made me so good. I don’t stand out alone, I have the best boxing team.

“People were complaining that Leo Santa Cruz was too small in my previous fight, so now I will basically go out and show that the difference in size doesn’t matter. I will defeat whoever is in front of me. I am trying to become legendary.

“I will definitely look to face the bigger guy. He might feel like he can face me. I definitely saw Floyd fight Logan Paul, a much bigger guy than him, and took some notes.

“I don’t know what Barrios will offer, but I will do my best. I make the fans enjoy the fight wherever it is ”.

“’Tank’s pay-per-view numbers opened the doors for the rest. That’s thanks to Tank’s social media. When they ask me why people gravitate towards him – he is equal to any boy who comes from the most humble cities. Look at the basketball players – humble cities. He will show you that nothing is impossible if you focus on something surrounded by the right people.

“’Tank’, Devin Haney, Teofimo López and Ryan García will be the new Four Kings if the fights happen. Let’s keep things in perspective. Right now, they are doing the same thing that the original Four Kings did in their early days. All we have to do is relax and let things happen by themselves. All these fights that people want to see are going to end up happening sooner or later.

“Do you realize that ‘Tank’ doesn’t provoke anyone? He never has. But he proves his worth to you if you put him in front of someone. If you’ve known ‘Tank’ since he was an amateur, he shows his thing in the ring. It’s like a new version of Mike Tyson.

“I don’t focus on the weight, but on the rival. When I started studying it, their coach and I actually went back to the days when they were amateurs and we already know each other. It’s about the mental. He knows my athlete and I know his. That night will be a great mental test. It will be about who manages to hold more to their convictions and their strategy. That’s what the fight is about for me.

“I wouldn’t say this is the toughest exam of ‘Tank’ career as no one has seen the best of ‘Tank’ so far. I know his best version, and you have not seen it yet ”.

“This pay-per-view is one of those events that you don’t want to miss. You know it will be great when you have the most exciting fighter of all. Expect nothing less on June 26.

“Coach Calvin Ford is a tremendous coach who has been with Gervonta from day one and has generated a great strategy that I do not doubt in the least that he will be able to execute. However, Barrios came looking for him and he has another great coach like Virgil Hunter, who has made him progress a lot.

“We know this will be a close fight, but Gervonta just has to figure things out from the start. I am convinced that he will be able to do it, but it will take a little time. Barrios wants to hit the ground running.

“Gervonta is reaching his prime. He is getting more comfortable with the press as he really understands what he has in front of him. He knows his ceiling is to be the top boxing star. However, inside the ring, nothing has changed.

“The co-main event will be a great fight between Erickson Lubin and Jeison Rosario. It will be very entertaining. A win for Lubin will put him one step closer to his ultimate goal, as he feels he is the best in his division and eventually sets out to avenge his loss to Jermell Charlo. However, his rival is a tough nut to crack and it will be an exciting contest.

“Former unified champion Julian Williams is looking to rally against Brian Mendoza as part of the pay-per-view. Julian is obviously one of the best fighters in the division, looking to win back what he lost.

“The opening fight will see the extremely resilient Batyr Akhmedov face Argenis Mendez, who is always ready to fight. That shows you how entertaining the entire billboard will be. I am very excited to return to the State Farm Arena. ”