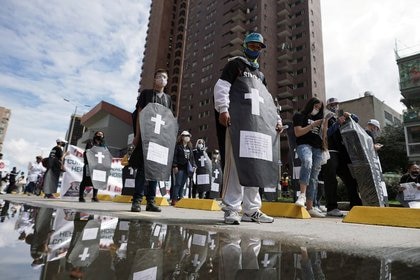 Workers and students take part in a protest against the social and economic policies of Colombian President Iván Duque in Bogotá, Colombia, on November 19, 2020. REUTERS / Nathalia Angarita DO NOT RESALES. NO FILES

BOGOTÁ, Nov 19 (.) – Thousands of workers and students protested Thursday against the economic and social policies of President Iván Duque, in a new demonstration to demand demands in health, education and employment despite the restrictions still in force due to the pandemic of COVID-19.

In the main cities of the country, protesters marched peacefully and tried to respect the demands of wearing masks, distancing themselves and the prohibition of crowds to prevent the spread of the coronavirus, on the fourth day of protest since the quarantine was lifted at the end of August that ruled since March.

COVID-19 has so far left more than 1.2 million people infected and 34,563 dead in the South American country of 50 million inhabitants, which between November 21 and mid-December of last year faced several demonstrations and three strikes that they were suspended for the Christmas and New Years holidays.

“This is a government that neither dialogues nor negotiates and that leads us to maintain the mobilization. It is a deaf, blind and mute president in the face of other opinions,” the president of the Central Unitaria de Trabajadores (CUT) told . in a telephone interview. ), Diógenes Orjuela.

The union leader revealed that the demands on the government include improving health coverage, education, a basic income for the unemployed and poor people who do not receive a pension, in addition to rescuing small businesses.

“As long as the government’s attitude of no dialogue, no negotiation, is maintained, the mobilizations will continue throughout the country,” Orjuela said when announcing new protests for December and next year.

The death in September of a citizen in a police procedure and the subsequent wave of protests that broke out in Bogotá and the neighboring city of Soacha in which 13 people died, added to the recent massacres and crimes of social leaders, gave another motive to the protesters.

Last year’s largely peaceful demonstrations ended with some unrest in the first days, with looting of shops and attacks by hooded men against public transport and bus stations, which led the government to enact a curfew in Bogotá and Cali.

In a confrontation that took place in the Colombian capital in November last year, the young Dilan Cruz died, who was hit in the head with a tear gas projectile fired by a policeman and became a symbol of the protests.

But the demonstrations on Thursday took place peacefully in the cities of Bogotá, Medellín, Cali, Barranquilla and Bucaramanga, according to the organizers.

The rains that hit Colombia on Thursday caused the disintegration of the demonstration and the concentration in Bogotá.