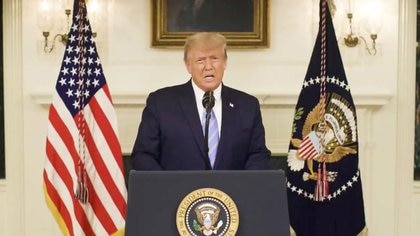 US President Donald Trump delivers a speech the day after his supporters stormed the US Capitol (Donald J. Trump via Twitter / via REUTERS / Archive)

The president of the United States, Donald Trump, again condemned this Wednesday the assault on the Capitol, ensuring that none of his followers can “ever endorse political violence”, in a video in which he made no reference to the impeachment against him approved hours earlier by the House of Representatives.

“I want to be very clear, I unequivocally condemn the violence of the past week “Trump began by saying, alluding to the massive irruption of his followers into the Congress building that occurred on January 6 during the certification of Joe Biden’s victory in the elections, events that left five dead and dozens injured.

“No true follower of mine can endorse political violence, nor may it disrespect the security forces or the United States flag, nor may it threaten other Americans. If you do any of these things, you are not supporting our movement, you are attacking it and also the country “, said the outgoing president, who will leave office on January 20.

On recent FBI reports that speak of possible new violent demonstrations during Biden’s inauguration are scheduled for that date, Trump asked his followers “to think of ways to ease tensions and promote peace in the country.”

“Every American has the right to be heard in a peaceful and respectful way, but I cannot emphasize enough that there should be no violence, law breaking or vandalism, everyone must follow the instructions of the security forces”, He indicated.

During the assault on the Capitol that occurred on January 6, when Trump supporters broke through security fences and forcibly entered the United States Congress compound, five people lost their lives, including two policemen (one of them beaten to death) and three protesters (one of them shot in the chest).

This is the second time that Trump has publicly condemned these events. However, during that fateful January 6 He used his social networks to describe the protesters as “patriots” and urged them to march to the Capitol and “fight devilishly” to pressure legislators not to accept the results of the November elections.

“I have given the order to the federal security agencies to use all the necessary resources to maintain order,” he stressed.

Trump also referred in the video to the recent decision of numerous social networks, including Twitter and Facebook, to cancel their personal accounts after interpreting that the president, who accuses without evidence of having been a victim of fraud and still does not recognize the results of the elections, he had harangued his followers to violently storm the Capitol.

“I want to say a few words about the unprecedented attack on freedom of expression in recent days,” started saying.

“Efforts to censor, cancel and blacklist our fellow citizens are wrong and dangerous. What we need is to listen to each other ”, explained.

At the end, Trump called on “all Americans” to “overcome the passions of the moment” and come together as one people.

But at no point in the video, allegedly previously recorded, He referred to the impeachment against him approved by the House of Representatives of the United States Congress on Wednesday, precisely after accusing him of the charge of “incitement to insurrection” during the events of January 6.

The resolution was approved by 232 votes in favor and 197 against, and begins impeachment in the Senate. If he is convicted, a fact that would take place after handing over power due to the timing of the process, Trump will be disqualified from holding public office in the future.