One of the issues that has given much to talk about in recent days has been the fuel crisis that the bad weather in the United States has left in various locations in that country and in Mexico. Faced with this problem, firms like Costco and other supermarkets are about to experience a new shortage of certain products.

This is a problem that, although it is far from being able to be solved by many of the brands in the market, has now become a situation that has slowed down operations for many of them, while for some points of sale such as Costco it will mean the shortage of certain products.

In principle, it is fair to recognize that the situation we are talking about is not minor. Due to the frost facing the northern country, Texas decided to close the supply of natural gas to Mexico.

This announcement came from the hand of the state governor, Greg Abbott, who announced that from this Wednesday until February 21, exports of fuel outside the territory are prohibited.

The extreme cold that exists in that locality has triggered the demand for natural gas fuel, which is now crucial to guarantee the correct functioning of the electrical system.

It is right here where the alerts were set for the Mexican market, since the country depends on gas exported from the United States.

The situation is important. More than 60 percent of Mexico’s energy generation depends on the natural gas used by combined cycle plants and around 70 percent of that consumption is covered by imports from the northern country.

Faced with this situation, in recent days the Mexican federal government urged citizens and large companies to moderate the use and consumption of gas and electricity, which has naturally affected the operation of many companies throughout the country.

The auto industry was one of the first to resent the ban. Through statements, firms such as Volkswagen de México, General Motors (GM), Mazda, Ford and Audi announced the total or partial stoppage of their operations on both sides of the border.

Volkswagen, for example, indicated that it will stop the production of its Jetta, Taos and Golf in Mexico, “in order to comply with the requirements to reduce the consumption of natural gas that have been requested by the competent authorities, Volkswagen de México will adjust its production, ”the company reported in a statement.

Thus, the company explained that in the case of the Jetta, production will stop on Thursday 18 and Friday 19, while for the Taos and Golf the suspension will be only on February 19.

With this, the Volkswagen personnel working in these segments will enter a technical strike scheme.

This decision is in addition to the measures taken by other players in the automotive industry in the face of the crisis that is now being experienced in the United States.

Since the night of this Tuesday, General Motors suspended its operations at the Silao plant, Guanajuato.

For its part, Audi adjusted the production of the Audi Q5 in San José Chiapa, Puebla, because the gas supply is a “resource that is indispensable” in the manufacture of this model.

“Ensuring job and financial stability for all employees is the top priority for Audi México. Therefore, the labor sustainability system will be applied “, detailed the company.

Now these problems related to fuels have begun to reach the final consumer, who will see a reduction in the supply of some basic and mass consumption products in some of the main supermarkets and points of sale such as Costco.

And it is that in response to the government’s request, Costo México indicated that it would suspend the operation of its bakeries until the energy supply was restored. Additionally, it will stop producing roast chickens, pizza and the traditional ‘chicken bake’, at least in its establishments on the border. 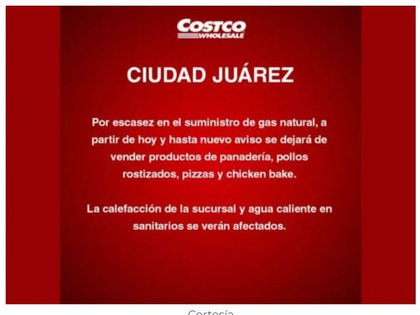 Costco is not alone. For its part, HEB Mexico announced that from the past February 17th and until further notice, I would reduce their production of bread and tortillas in some of its stores.

Through a statement issued from its social networks, the brand highlighted:

“Due to force majeure and in order not to cause inconvenience to our community and their homes, we inform you that starting today we must reduce gas consumption. Unfortunately this affects the production in our bakeries and tortillerías in some of our stores, for this reason we will offer limited service until further notice ”.

For the consumer, this will not only mean difficulties in accessing these products, but also their possible increase in price due to demand and the reduction in supply. 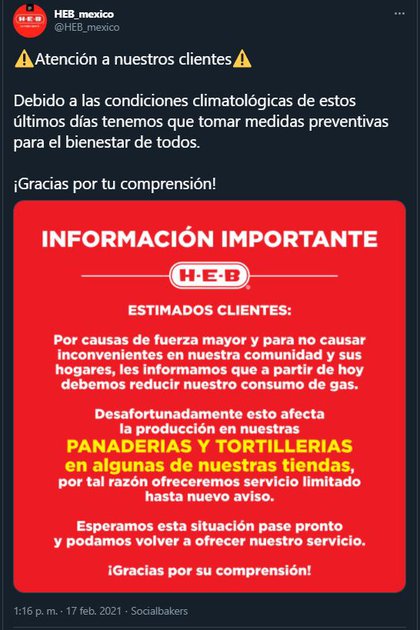 The foregoing is a clear example of the urgency that industries and governments should have to adopt alternative sources of fuel and energy.

For several years the issue of green energy has grown exponentially and although there is enormous potential, the truth is that jobs in the field are small at least in Mexico.

Although the country is among the four most attractive countries to invest in renewable energy in Latin America, the truth is that without clear regulation, the lack of public tenders as well as the health crisis caused by Covid-19 have discouraged investment.

For brands, thinking about exploring and working in this field is a question of survival beyond social responsibility. What is at stake is the relationship with the consumer from any point on which the case is studied.