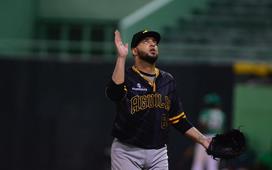 The Águilas Cibaeñas blanked the Leones del Escogido at the Cibao Stadium on the only day of this Saturday by beating them 2-0, because only this game was scheduled since both the Licey and the Gigantes players tested positive for Covid-19 and their matches are suspended.

Starting pitcher Yoanner Negrín threw six solid innings in which he allowed only two hits, struck out two, being the hero of the game along with Robel García who, after a hit by Juan Lagares, hit a home run throughout left field to give the team an advantage. local 2-0.

While Lions starting pitcher Josh Lowey threw 4.1 innings, with five strikeouts and three bases on bullets in which he allowed only three hits.

In the sixth inning, faced with the threat of the scarlets, the harriers used two pitchers to get the zero, before the entertainment of two runners on base.

The winning pitcher was Yoanner Negrín and the loser was Francisco Pérez, who allowed García’s home run in the sixth inning, while the save was scored by Neftalí Feliz.

In addition to Robel García’s home run, Edmundo Sosa and Isaias Tejeda had two hits each Jonh Nogowski, Juan Lagares and Wilmer Difo each had one hit.

For the Lions that only had four hits, Ivan Castillo, Joe Dunand, Cesar Puello and Edwin Espinal distributed them.

For the shutout, the Eagles used five pitchers, while the Lions used six.