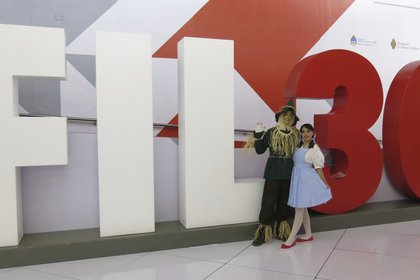 FILE – In this Nov. 28, 2016 file photo, promoters of “El Libro Total” dressed as characters from the Wizard of Oz pose next to a sign for the Guadalajara International Book Fair in Guadalajara, Mexico. FIL Guadalajara will be virtual in its 2020 edition due to the COVID-19 pandemic and will be held from November 28 to December 6. (AP Photo / Berenice Bautista, file)

MEXICO CITY (AP) – The Guadalajara International Book Fair is ready to begin its first virtual edition with a poster that includes more than 300 activities, three Nobel laureates, 300 authors from 38 countries and 120 speakers.

The fair, which will take place from Saturday to December 6, announced in October that due to the pandemic its 34th edition would be online, but this did not prevent a large call between authors and publishers.

The literary festival will be headed by Lídia Jorge, Portuguese writer winner of the FIL Prize for Literature in Romance Languages ​​2020, and Argentine writer Camila Sosa Villada, who will receive the Sor Juana Inés de la Cruz Prize for her novel “Las malas”. In addition to receiving his prize, Jorge will participate in the discussion “A thousand young people with …”

The Nobel Prize in Chemistry Venki Ramakrishnan will give a lecture entitled “The genetic machine”, while Aaron Ciechanover, winner of the same award, will speak of “Moral dilemmas now and beyond the COVID-19 pandemic”.

The academic program includes the participation of the Egyptian diplomat Mohamed ElBaradei, winner of the Nobel Peace Prize in 2005; the French economist Jacques Attali; the United States Ambassador to Mexico, Christopher Landau; the UK ambassador to Mexico, Corin Robertson, and the Mexican writer and historian Enrique Krauze.

The artistic program of FIL Guadalajara, with the support of Culture of the University of Guadalajara, will offer different free shows every night from 9:00 p.m. The opera “Madame Butterfly” will be presented, a concert for the 250th anniversary of Beethoven’s birth with the Zioumbilov-Gutiérrez Duo, the play “Novecento” by Alessandro Baricco with a performance by Benny Ibarra, and a concert by Lila Downs from the Macedonio Alcalá Theater in Oaxaca, among others.

All the activities of the 34th edition of FIL will be free. The easiest way to access them is through www.fil.com.mx. Multiple contents can be followed on Channel 44 and Red Radio Universidad de Guadalajara, in addition to other public television stations in Mexico and Latin America such as Channel 22, which will be one of the virtual venues of the fair.