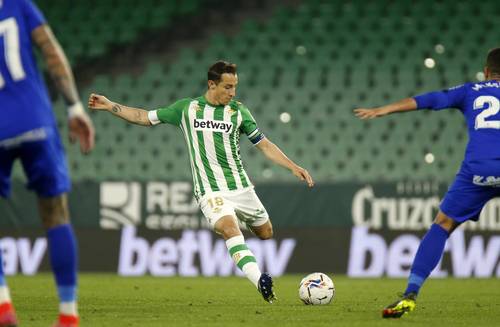 ▲ The Mexican midfielder returned to the captaincy of the Verdiblancos and was booked at minute 70. Photo @RealBetis

Seville. With the Mexican Andrés Guarded as starter and captain, Betis beat Getafe 1-0 to climb to the sixth rung, within the positions that grant a ticket to European competitions, at the start of day 24 of the Spanish League .

Guarded had a good performance and was close to the goal with a shot from medium distance that forced the Getafe goalkeeper to stretch to deflect the ball.

The only sour moment for the Mexican was when he was cautioned at minute 70, in a play that outraged him because he didn’t even touch the rival. Meanwhile, the also tricolor Diego Lainez stayed on the bench.

Although the duel was complicated for Betis, especially when Sergio Canales took a penalty that was saved by goalkeeper David Soria. The midfielder also failed to score on the rebound, sending his shot sky high.

The goal came near the end, when Borja Iglesias shot another penalty shot to beat Soria in the 84th minute and give the Sevillian team the victory at home.

In the final discount (90 + 3), Betis was left with 10 men due to the expulsion of Portuguese William Carvalho, for a second yellow card, but resisted to defend the scoreboard.

In their eight league games played so far in 2021, Betis barely lost one, to Barcelona (3-2), and have two consecutive victories, after their important victory last Sunday at Villarreal (2-1).

The Verdiblanco team is now sixth, with the same points as Villarreal, which drops to seventh place, awaiting their visit to Athletic on Sunday, tenth in the table.

Much worse is Getafe, which now has four consecutive defeats and has barely added a point in its last six league games. The results have caused the Madrid team to reach step 14, just three points above the relegation zone.

The leader, Atlético de Madrid, receives Levante (11) this Saturday. The colchoneros arrive this weekend with 55 points, six more over Real Madrid, which is lurking for the lead and will face Valladolid. Meanwhile, Barcelona is third with just 46 units.