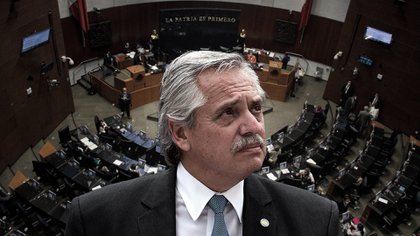 President Alberto Fernández managed to compose a broad list that expresses different aspects of Peronism and on March 21 he will assume as head of the National Justicialist Council, replacing the national deputy José Luis Gioja.

The negotiations consumed until the last minute of Tuesday, the date set as the deadline. Only the minority sector headed by the governor of San Luis, Alberto Rodríguez Saá, did not agree and will present its own list.

Fernando Espinoza, Mayor of La Matanza and former head of the Buenos Aires PJ, Santiago Cafiero, chief of staff, Hector Daer, CGT leader, Máximo Kirchner, national deputy, and Sergio Berni, Buenos Aires Minister of Security, are some of the leaders who will also make up the payroll as “advisers”.

“The important thing is that the unity of Peronism was achieved and this will help strengthen the Frente de Todos”, Daer assured ..

However, the unity will not be total. Rodríguez Saá will head a list that includes Milagro Sala, Gabriel Mariotto and Alesandra Minnicelli, who yesterday denounced that she was excluded from the membership register. In Peronism they downplay the importance of this sector and assure that it is a testimonial opposition that will not alter the assumption of Alberto Fernández as president of the PJ.

There were negotiations until the last minute for the San Luis to desist from internal competition. Nevertheless, asked the Government to express a harsher attitude against the International Monetary Fund and in favor of the situation of Milagro Sala, the social leader arrested for having committed several crimes that requires pardon, conditions that were not accepted.

The same occurs with referents of the Party Party, Alberto Fernández’s political group, which is not a member of the PJ.