The Borussia Dortmund beats Sevilla on the road 3-1 in one of the round of 16 crosses of the UEFA Champions League. The German team He did not find his way in the first minutes, but then he surpassed the Spanish cast on the scoreboard and in the match process. In the stadium Sánchez-Pizjuán, it took only seven minutes to local to open the marker after Suso he faked with a left-handed hit, but then he put another hook and his right shot deflected into the German defender Mats Hummels Y It was unapproachable for the Swiss goalkeeper Marwin Hitz.

Then the local cast continued to take the initiative and had another arrival with a right hand shot from the Brazilian Fernando. The German team showed more desire than ideas and in the following minutes could not reach the Sevillian team area seriously. However, the visitors found the same at 19 minutes, when the German Mahmoud Dahoud He scored a great goal after hitting him from the right from outside the area and broke the streak of the Guadameta Bono with 728 minutes without receiving as many. The goal was a psychological blow for both teams: Sevilla fell back and Dortmund went for more.

The Teutons looked for the advantage and at 27 minutes, after a wall with the English Jadon sancho the norwegian Erling haaland, put things 2 to 1 with a shot from the floor. The flow of the tide remained the same and those led by Julen lopetegui They were badly stopped and Haaland himself had the chance to put the third, but his shot diverted Bono to a corner. At the exit of the corner kick, Hummels himself could have converted, but the ball went over the crossbar. 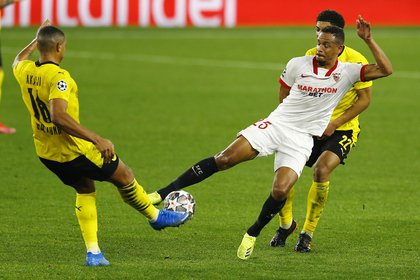 Sevilla came out in search of the discount, but in the second half they found a German armor. In the image, the duel between Fernando and Manuel Akanji (REUTERS / Marcelo Del Pozo).

At the beginning of the complement, Sevilla went out to look for the discount and a shot of the Papu Gomez he went to the corner kick, which then did not create danger for the German goal. The Germans are shown retracted and waiting for a counter exit.

When the game entered its last half hour, Lopetegui put everything he had with three offensive changes: he put the creation midfielder Nemanja Gudelj (for Ivan Rakitic) and two forwards, Luuk de Jong (for another Suso flyer) and Munir El Haddadi, with fresh air by another attacker (En-Nesyri). The home team knew that the goal was perhaps no longer victory but to avoid defeat.

Sevilla kept trying at 73 minutes Oscar Rodriguez (entered by Joan Jordan) had a clear shot with a shot from outside the area, which hit the right post of Hitz’s goal, who in a second instance was able to shoot the ball out.

So far in the last ten minutes, Sevilla continued with greater possession of the ball, although they could not capitalize on it on the scoreboard.

With an unstoppable Mbappé, PSG beat Barcelona for the first leg of the knockout stages of the Champions League

Barcelona hit the best player in its history: Lionel Messi debates his future