Home>Tech>With 3,281 drones, this impressive show in Shanghai has set a new world record

As drones have evolved in capabilities over the past few years, the shows capable of creating have, too. If the 1,200+ drones Intel used in its 2018 Winter Olympics show were insane, the more than 3,200 drones that have recently lit up the Shanghai sky they are even more so.

A choreography of 3,281 drones

3,281 perfectly synchronized drones which have set a new world record. The feat has been accomplished by Genesis, Hyundai’s luxury car brand. The truth is that it is a promotional campaign to announce the entry of Genesis into the Chinese market, but it is still a technological feat.

During the performance, the 3,281 drones have performed a series of joint dances to form three-dimensional and gigantic shapes. Among them we have for example a hand, the double helix DNA, the iconic front end of the Genesis cars, a recreation of their G80 and GV80 models, text messages and, of course, the Genesis logo.

With the ingenious title “The genesis of Genesis” the automaker thus marks your entry into the China market. But it has also served him for something else: breaking the record for the largest number of unmanned and coordinated aerial vehicles simultaneously. 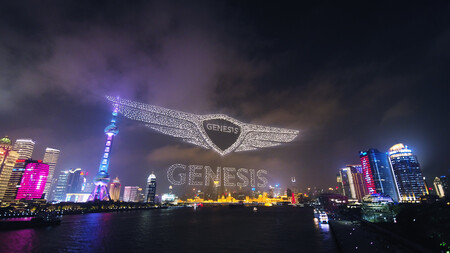 In addition to shows, drones have earned a niche in all kinds of industries and the consumer market. Traditional consumers generally use them as a tool to record videos from above, however industries such as the military also take advantage of their advantages, as do the police. For being used they are even used to detect sharks on beaches with bathers.