In 2009 smartphones had not finished exploding as they did shortly after and smart watches were just one more futurism, so the kings of technology and consumer electronics were still computers in general and laptops in particular, that had already become much cheaper while improving the experience they could offer. Ephemeral glory.

In that context, Windows reigned as the desktop operating system with a market share of more than 95%. Computing was a Microsoft thing, with macOS (then Mac OS X) and Linux limiting itself to the crumbs left by the former. Then came the ten years, and with them, the rise of the smartphone, the post-PC era (which never meant that we were going to burn our computers, but simply to use them much less in favor of other devices) and the change of the rules of the game. . 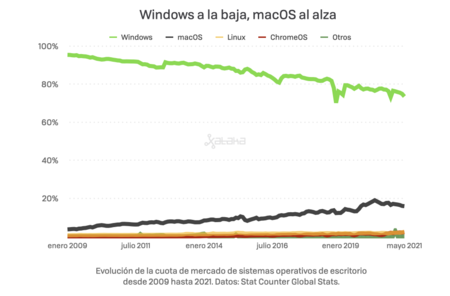 It is no longer that Windows is less relevant for not having known how to get on the smartphone bandwagon, the main Internet access device of almost-entire humanity, is that its market share has fallen by more than twenty points from 2009 to 2021, based on data from StatCounter. The computer market is still largely a Windows market, but macOS, Linux and ChromeOS have been taking more and more prominence from it.

In addition, the Microsoft business division where Windows is located (along with the Surface range, the Xbox set or the income from Bing) is the only one of the three that is going down. Much better are those of business software (Office, Dynamics) and cloud (Azure, SQL, Windows Server …).

But above all, Windows has failed to break its legacy. In 2012 he wanted to start doing it with Windows 8, which was still the inclusion of a touch interface on a very accepted Windows 7 … without actually changing anything. When the bet is left to the user, it is difficult for them to accept sudden changes. Henry Ford’s classic phrase, “If I had asked people what they wanted, they would have told me faster horses.” Few people embrace breakthrough interfaces, but when there is no other left, they end up assuming.

Windows has made several attempts in recent years to transcend its legacy – none have had a journey. 11 is the new opportunity.

With Windows 10 we have seen how history repeated itself in these six years. The best example was Windows 10 S launched alongside the Surface Laptop, another half bet that did not last a year.

A similar fate ran Windows 10X, an idea as ambitious as it is futuristic, with double screens and a return to a focus on mobile devices, which also ended up being canceled before its first year of life.

Almost nine years have passed since the arrival of Windows 8m and although Microsoft’s operating system has advanced in many aspects, it has been almost nine years without a break with the past, with traditional interfaces, with too many visual inconsistencies throughout of the system, with visions rooted in the desktop, that allows moving towards the next through simplified interfaces. And when there has been a threat, it has been interrupted before there was time for anything.

The arrival of Windows 11 should be the turning point. Or rather: it must be. To stop losing market share and to offer, in the absence of a mobile platform, a greater sense of ecosystem to users. Support for running native Android apps can be a great starting point. 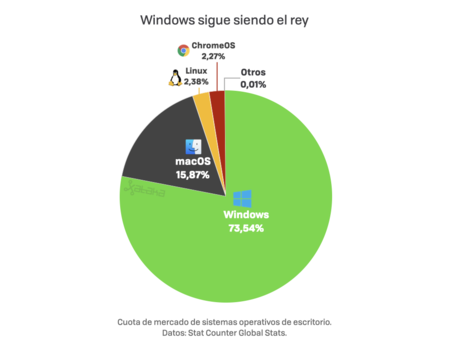 If developers respond to the seduction attempt of the new Windows Store conditions, which allow them to keep 100% of the revenue if they use their own payment platform – an unbeatable deal for them at a time when Apple is increasingly questioned by its initial 30% -, there could also be news that makes the user experience much better. And with it, the ability to retain and attract users.

Nadella said after introducing Windows 11 that “this is the first version of a new era of Windows.” The same CEO who changed the focus of Microsoft’s mobile bet after understanding that the legacy had no path, that he embraced open source as we would never have expected from his company or that he opted for the video game in the cloud instead of following the path of Sony or Apple, who deny this model.