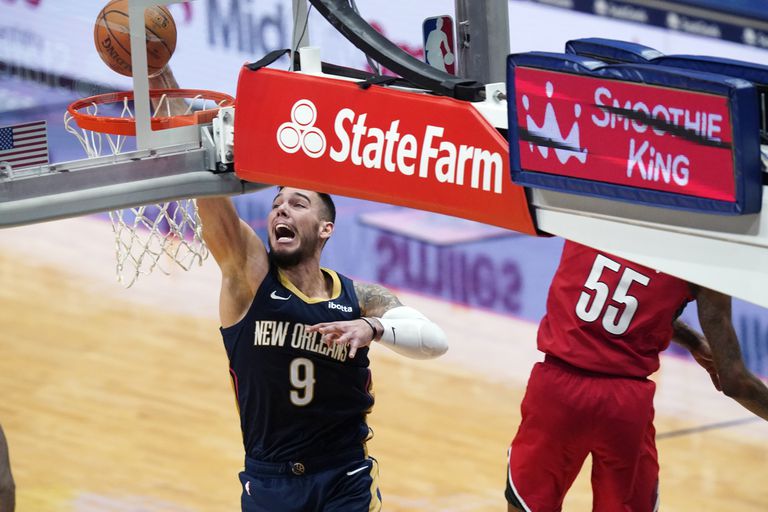 Willy Hernangómez scores in the game against Portland.Gerald Herbert / AP

Willy Hernangómez’s sporting life has changed in 18 days and 10 games. From not playing, from spending all his time on the bench, he has become one of the players who contribute the most in New Orleans. His averages have gone from lows, to 8.3 points, 7.6 rebounds, 1.4 assists and 21 minutes.

His performance in the last game did not save the Pelicans from the loss to Portland (124-126), but it did help his team have options almost to the end. He was, by far, the top rebounder of the game, with 17 sacks, 7 in attack, in addition to 11 points.

Stan Van Gundy barely had Willy until February. Injuries began to leave a gap in the pivot position and the Spanish player made good use of the minutes he began to count on. It is the fifth season in the NBA, the first in New Orleans after its start in New York and almost two years in Charlotte. Willy had come to the Hornets in February 2018. Last season he averaged only 12 minutes, 6.1 points and 4.3 rebounds in the 31 games he played.

“It was a matter of time before we could finally find the key. We needed time to get to know each other better and for the chemistry to improve. Every game we are looser. We are in a good line and the results are going to come ”, Willy affirmed on Tuesday in the Timeout program of the Spanish Basketball Federation (FEB). The Pelicans’ starting center is New Zealander Steven Adams and Willy is also competing for that position with second-year player Jaxson Hayes, number eight in the 2019 draft.

The Pelicans had improved their results with four straight wins in early February, but now have four losses in their last five games. They are 12th in the Western Conference standings with 12 wins and 16 losses.

In the game against Portland, Zion Williamson stood out with 36 points, 6 rebounds and 4 assists, Lonzo Ball, with 21 points and Redick, with 16.

The Blazers showed their excellent moment and added their sixth straight victory, thanks mainly to the efficiency of Damian Lillard, who scored 43 points and the decisive triple with 16 seconds remaining. Lillard also added 16 assists.

Ricky Rubio has also improved his performance with Minnesota. Starting due to the injury of D’Angelo Russell, the Spanish point guard got 20 points and 13 assists in the game that the Wolves lost in overtime against Indiana (128-134). Towns, who after his absence due to coronavirus is reaching his best level, added 30 points and 10 rebounds, and Beasley, 31 points. But it was insufficient to beat the Pacers. Domantas Sabonis led his team with a triple-double: 36 points, 17 rebounds and 10 assists.