There are only a couple of days left for the name of the new Miss Universe to be known, who will receive the crown from the hands of the South African Zozibini Tunzi, and this Friday the preliminary parade of the contest will take place, where the 74 contestants will appear in swimsuit and evening dress before the jury, which will have the task of choosing 20 of the 21 semifinalists. The last semi-finalist will be chosen by public voting.

The judging panel, consisting of former Miss Universe Zuleyka Rivera and Brook Lee, as well as executive Sheryl Adkins-Green, actress Arden Cho, businesswomen Deepica Mutyala and Christine Duffy, presenter Keltie Knight, and economist Tatyana Orozco , will choose the semifinalists tonight, but the names will only be revealed on Sunday’s coronation evening, which will air on Telemundo.

The good news for Miss Universe fans is that the preliminary gala, although it will not be televised, can be seen through the Miss Universe channel on YouTube.

Here, in this link on Miss Universe’s YouTube account, you can see the preliminary show, totally free.

The preliminary parade will be held at the Seminole Hard Rock Hotel & Casino Coliseum in Hollywood, Florida, the same site as Sunday’s coronation.

The broadcast of the preliminary parade this Friday, May 14, will begin at 7:00 pm. 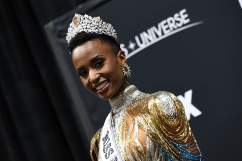