When looking for a senior programmer, there are some companies that require a few inordinate requirements. For asking not to miss, but sometimes the years of experience requested are directly impossible to meet.

These are some of the job offers that surprised the sector at the time of their publication. Most of them are no longer accessible, either because they have already expired or because they quickly realized that the claims were perhaps too high.

12 years of experience in Kubernetes

An offer posted on Intellijobs by IBM for India drew attention for requesting “a minimum of 12 years in the administration and management of Kubernetes.” It is a free system for the automation and handling of containers, originally designed by Google in mid-2014 and donated to the Cloud Native Computing Foundation.

The offer was published in mid-2020 and if we do the math it is easy to see that this requirement of years was completely out of place. The ‘Cloud Native Infrastructure Engineer / Architect’ that IBM was looking for became one of the most representative offerings of this type of impossible requirements.

Sometimes not even the creator could apply to the position

“Maybe it’s time to rethink that years of experience equals skill level,” noted the creator of FastAPI. A reflection that according to the offers indicated here is quite correct.

It required 4+ years of experience in FastAPI. 🤦

I couldn’t apply as I only have 1.5+ years of experience since I created that thing. 😅

The first version of React was released in mid-2013. Facebook’s Javascript library is in high demand, but it is also easy to find multiple users reporting that they have come across React offers where up to 7 years are requested, bordering on the limit.

The discussion of a React offering exposes the debate as to how much experience is needed in React. “What kind of application needs such deep knowledge?” Asks user Michael Taylor.

Is there even 7 years of stuff to learn about react? What exactly does an application do that requires 7 years of react knowledge to build? You can get a PHD in computer science in that time, is React a common thesis topic? 🤣

Neither Java nor Python are spared

Despite being widely known and used languages, even with them anecdotes about crazy job offers are often told. One user reports that in 2001 he saw an offer from a company looking for 10-15 years of Java. Considering that the language originated in 1995.

In the case of Python, Guido van Rossum, its creator, posted on Google+ the story of when your experience with Python caught the attention of a company. What less. At least in this case, the requirements were met.

Guido van Rossum, the creator of Python, would get emails because he has “experience with Python”.

“How many years of experience do you have?”

Asking for many years of experience is standard practice and makes sense when the responsibility for the position is commensurate. But it is unfair when in addition the position is presented as for less experienced programmers. In 2017, a Seattle company posted a job offer on TechFetch requesting more than 10 years of iOS experience and skills in other languages, but the position was for a junior profile.

I have an alert set up for information security internships on LinkedIn and this was one of them. These requirements are crazy. pic.twitter.com/sVIxd1TiXQ 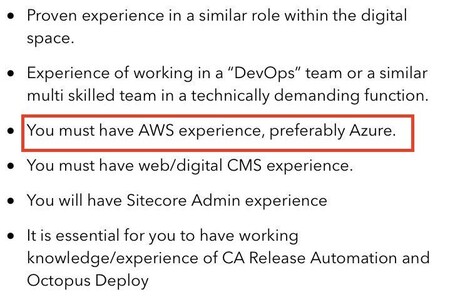 Years of experience is not the only mistake made in these crazy job openings, there are also examples that knowledge is requested without being very clear what it means. An offer for a cloud developer asked for experience with “AWS, preferably Azure.” Difficult to understand since Azure is from Microsoft and AWS is Amazon Web Services. Its main competitor.

10 to 12 years of experience with NodeJS

Perhaps Ryan Dahl received an email similar to the one we explained from Guido van Rossum. Indian company Mastek Ltd published an offer asking for 10-12 years of experience with NodeJS. Somewhat difficult considering that the first version was released in 2009. Technically it is possible to meet the requirements, but few beyond their own creator surely meet the profile of what is requested.

I was contacted by a recruiter looking for devs who have 10-12 years of experience in NodeJS.

I recommended Ryan Dahl (creator of NodeJS) to them.

How high are these recruitment guys? # Worldwar3 #falz #nodejs

Swift was launched in 2014. Despite this, the user kevinkaywho commented in 2017 having found an offer that asked for more than 8 years of experience with Swift. The popularity of the programming language created by Apple is high, but it is difficult to have so much experience.

Found a job opening that requires 8+ years of Swift experience.

Swift is a programming language that came out 3 years ago.

Flutter arrived in 2017. Even so, a job offer shown by the user Mariano Zorrilla explains that in Santa Fe an engineer with 3 to 5 years of experience using Flutter was requested, with the addition of “verifiable”. Some crazy requirements where perhaps Google engineers can qualify for the position if we take into account the minimum scale.

8 years of experience with Blockchain

VISA was looking for a blockchain specialist with 8 years of experience working on Ethereum-based distributed applications. An announcement that caught the attention of the community considering that Ethereum only existed for less than 3 years. The offer was published in 2018 and Ethereum is from July 2015. Even if Bitcoin was the cryptocurrency they were referring to, it would still be complicated since it had only been nine years.