A week after its release, many of the comments about the eighth installment of ‘Resident Evil’ are focusing on a couple of aspects: on the one hand its setting in a European village, a kind of hub linear from where all your scenarios startlike the ill-fated castle of Lady Dimitrescu and her daughters. On the other, the reorientation of its mechanics towards unbridled action, an element that has never been alien to the series, but that in this installment is enhanced with waves of very resistant enemies and an abundance of ammunition and weapons.

With such characteristics as standard bearers of the discussions, it is inevitable to return again and again to the comparisons with ‘Resident Evil 4’, the installment of the saga of 2005 that took a turn, there for the first time, towards the mechanics of shots above all other considerations. A twist that made it one of the iconic titles in the series, and also one of the most influential.

But the other aspect of ‘Village’ that is causing talk, the semi-abandoned town, also He drinks a lot from that delivery that has just turned fifteen, only that there the town was … Spanish. It is one of the most outlandish elements of the saga, since what we have is a deep Spain, but “deep” as Lovecraft understood the term. Feral and aggressive villagers, iconic and meaningless phrases and even an initial appearance of La Benemérita listening to flamenco in a Seat Panda. The perfect material for a cult nightmare.

The story begins with the absolute protagonism of Leon S. Kennedy, one of the two heroes of the second installment of the saga. Your mission here is rescue the daughter of the president of the United States, Ashley, kidnapped by a mysterious organization called Los Illuminados, and held in a village in northern Spain. There you will meet characters with relatively Hispanic names, such as Bitores Méndez, chief of the villagers; Luis Sera, who is also investigating the case; or Ramón Salazar, one of the villain’s henchmen. The virus, this time, we know it under a mutation called (in Spanish) Las Plagas.

Only with these data can it be verified that ‘Resident Evil 4’ falls into one of the great errors of the representation of Spain in the audiovisual: the confusion and mixture of elements coming, actually from different Latin American countries, especially Mexico. Surnames like Salazar or the unmistakable Latin accent of the parts spoken in Spanish are good proof of this.

And that there was no lack of documentation: Like good Japanese, the folks at Capcom organized a documentation trip to Spain (and the United Kingdom) where they photographed all kinds of elements such as stone textures, settings and Gothic monuments. That was before the initial focus of crazy and over the top action was scrapped and morphed into another game, the first ‘Devil May Cry’ from 2001. 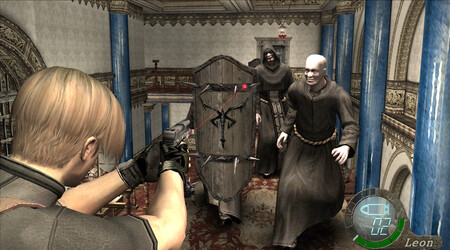 The Latin accent is not the only localization drama in the game: ‘Resident Evil 4’ is full of errors that betray quite serious documentation flaws. For example, the currency of the game is the peseta (hey, at least they are not pesos), a currency that had been replaced by the euro long before, in 1999. There are hieroglyphs on walls with a clear Mesopotamian influence, and an inscription of a human sacrifice in the clearest style of the Aztecs, something that historically has never been produced in Spain.

Although the most memorable of the game, without a doubt, is the churrigueresque use of Spanish with which the mysterious villagers of El Ganado (the putties that are thrown at us in the initial phase of the game) rebuke León. Some of the phrases are repeated so insistently, and are so ridiculous, that they become the germ of involuntary comedy. Some of them are:

There is! An outsider! Grab it! I’m going to tear you apart! Hey, here! I’m going to make you mincemeat! Look at him, he’s hurt! You are a pig! Behind you stupid! Don’t let it get away! Stop it, you son of a bitch! We have to go. To die is to live. Yes, yes, I want to kill! Die, die, die … Brains, brains, brains … Go behind. What the fuck are you doing here? Get out, you bastard! There is a rumor that there is a foreigner among us. Damn it, shit! It’s time to smash! Ah, what a mother! Come along! Don’t let him escape the island alive!

As is easy to detect, many of these expressions have elements typical of Latin American Spanish, and the result, based on repetition and voice work done by actors who clearly did not know what they were saying are some of the most remembered elements of the game. ‘Village’ is calmer, but this recreation of Montejo de Tiermes from ‘Resident Evil 4’ (data never fully confirmed) is much more charismatic, where does it end up.