It may not sound as familiar to many as other personalities in the fashion world. But Roy Halston Frowick, known simply as Halston, is based on a true story.

Halston rose to international fame in the 1970s with his clothing brand. Initially he began designing and manufacturing women’s hats and became well known after Jacqueline Kennedy wore a hat he designed for the presidential inauguration of her husband, John F. Kennedy. Known for his clean designs using luxurious materials such as silk, chiffon or cashmere, Halston’s aesthetic later became extremely popular in the urban-chic community.

Halston was also a fixture on the party circuit and was seen regularly at Studio 54 in New York City. In the 1980s, through a series of unfortunate business decisions, he finally lost control of his company and passed away in 1990 due to AIDS-related health complications.

The rich tapestry that is Halston’s life makes for an engaging visualization, and the eponymous Netflix miniseries traces the designer’s rise, artistic passion, and glamorous lifestyle and also touches on the HIV crisis in New York City. . However, his family has claimed that the description on the show is not entirely accurate. In a press release from the fashion icon’s niece, Lesley Frowick, stated: “The Halston Archives and Family were not consulted about the upcoming Netflix series involving an inaccurate and fictitious account of the famous fashion designer.” The statement further said that the Halston Archives “remains the only definitive and complete source on the man and his legacy as the personally appointed custodian of his papers and private effects.” Frowick is the executive director of these archives and has also produced a documentary titled ‘Halston: The Original Fashion Mogul’ about her uncle’s life. However, this is not the first time that the family of a famous fashion designer has protested a biographical description of the icon.

The book that serves as the starting material for ‘Halston’ is written by Steven gaines, writer, journalist and radio host. The international bestseller ‘The Love You Make: An Insider’s Story of the Beatles’ is also his. In the fashion industry, in addition to Halston, Gaines has also written the Calvin Klein biography. However, the accomplished writer had faced the wrath of Halston himself in the past when he collaborated with a young bartender at Studio 54 and wrote ‘The Club.’ Although the book was successful, Gaines was shunned for his veiled rendition of Studio 54 by many of the celebrities who were regulars there, including the designer. Despite conflicting claims regarding the accuracy of the content, the fact that (some) people who knew Halston closely were consulted for “Halston” means that the creators of the series are making an effort to keep it authentic enough. .

In an interview with Vogue, the executive producer Ryan murphy revealed that before filming the show, the lead actor, Ewan McGregor, who plays the couturier, had a private argument with Halston’s close friend for many years, Liza Minnelli, about the life of the fashion designer. Murphy went on to state how the show attempts to detail Halston and Minnelli’s friendship, as well as other aspects of his life such as his artistic journey, and the fact that he was the first designer to insist on having African American models at all of his shows. 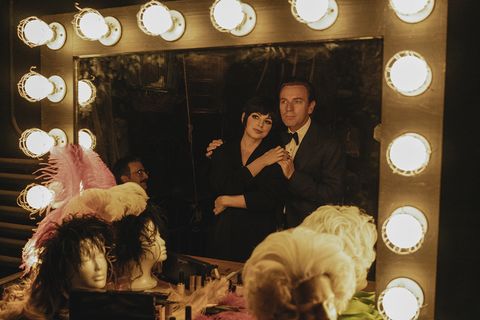 Although there may be parts of the story that are fictionalized for dramatic effect or for lack of details about what actually happened, there is a lot about Halston that seems to be accurately depicted on the show. Being a major celebrity, any significant deviation from the designer’s real life will be immediately noticed. So just like ‘The Crown’, the streaming giant’s crown jewel, ‘Halston’ is more or less based on the true story of the iconic designer’s life, definitely not a documentary. In 2019, a documentary with the same name was released in which he reviews the career of the fashion figure through those who knew him.