NVIDIA has delivered. At the beginning of last March he announced that before the end of that month would activate Resizable BAR technology on all of its graphics cards in the GeForce RTX 30 family. And it has. This innovation is already within the reach of users who have managed to get hold of one of these cards, although to use it it is necessary that the hardware of our PC meets several requirements.

Like AMD’s built-in SAM (Smart Access Memory) technology in its Radeon RX 6000 family graphics cards, NVIDIA Resizable BAR enables a PCI Express interface feature that allows the graphics card to communicate with the rest of the system to achieve that the CPU can access all VRAM memory, and not just the 256MB you can address in a traditional setup.

Allowing the CPU to access all the memory integrated in the graphics card is interesting because this strategy helps to optimize the operations of transferring textures, shaders (shaders) and geometry, which are very common in late-batch games. If the CPU can access the entire frame buffer, it acquires the ability to manage all these requests concurrently, preventing them from accumulating in a queue that would inevitably have a negative impact on performance.

What hardware is supported by NVIDIA Resizable BAR

In addition to having a GeForce RTX 30 graphics card, which is already a real challenge in itself, it is necessary that our PC meets several requirements to be able to enjoy this technology. The first of them consists of having a compatible CPU with her. NVIDIA has confirmed that AMD’s Ryzen 5000 processors with Zen 3 microarchitecture can take advantage of the Resizable BAR, and the 10th and 11th Gen Intel Core chips, too.

It is also necessary that our motherboard also supports it. According to NVIDIA, AMD processor boards with 400 and 500 series chipsets do, and whoever has an Intel processor will have to make sure that their motherboard has a Z490, H470, B460, H410 chipset, or one of the new motherboards compatible with 11th generation Intel Core processors.

According to NVIDIA, Resizable BAR technology offers us a performance increase of up to 12% in some games

Once we have made sure that we have a CPU and a motherboard ready to work with this technology we will have to check if the BIOS of our board it is compatible with Resizable BAR. If it is not and there is an update available we will have to renew it. This procedure varies from one motherboard manufacturer to another, so the ideal is to consult on their website how we should carry it out.

GeForce RTX 3060 graphics cards come with a Resizable BAR-compatible VBIOS, but whoever got a GeForce RTX 3090, 3080, 3070 or 3060 Ti card you will have to update the VBIOS in order to enable this technology. Owners of a Founders Edition card can download the update directly from the NVIDIA website, but whoever has a card from another integrator will have to look for the update on the website of their graphics card manufacturer.

The last step that we should not overlook requires installing the driver for GeForce 465.89 WHQL graphics cards or later in our operating system. If we have carried out the entire procedure correctly, the ‘Resizable BAR’ field in the NVIDIA control panel should tell us that this technology is already enabled. 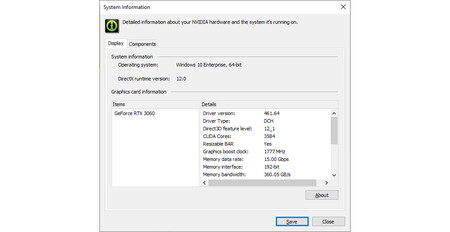 These are the supported games, but more to come

According to NVIDIA, Resizable BAR technology offers us an increase in performance of up to 12% in some games, an improvement that can make a difference in those titles in which the hardware of our PC is somewhat just when it comes to sustaining an approximate cadence of 60 FPS. However, at the moment there are not many video games compatible with this innovation, although more will arrive in the future. These are the titles that already allow us to use it: