This 2021 has arrived with a new privacy policy under the arm for WhatsApp. The instant messaging application is beginning to implement its changes around the world, informing its users through notices on the site itself. For this reason, many have chosen to switch to Signal, another application of the style.

In 2014, the company Mark Zuckerberg bought the instant messaging app. In this line, with the new policy it is intended that the data of the users of WhatsApp are shared with the rest of Facebook services. Something mandatory that users must accept in order to continue using their services.

However, these changes do not apply to members of the European Union, due to European data protection regulations. So if you reside in Spain, France, Italy or any other EU member country, WhatsApp You will not be able to share any data with the rest of the company’s applications.

But, outside of it, many users are looking for an alternative to be able to keep talking to their friends and family on a recurring basis without sharing anything. Along these lines, one of the apps that has received the most downloads has been Signal.

And it is that last week, Elon Musk, head of Tesla, wrote a clear message on his social networks after announcing the policy changes of WhatsApp: “Use Signal”.

It is an instant messaging application very similar to WhatsApp or Telegram. Although it does not have as much volume of users, the most experienced prefer it because it is focused on offering maximum privacy.

Signal uses an end-to-end encryption protocol called Open Whispers Systems for all communications, which means that messages leave your mobile already encrypted, and are only decrypted when they reach the recipient’s mobile. This way, if someone intercepts them on the way, they won’t be able to read them. Encryption of Signal is so popular that own WhatsApp He decided to use it when he implemented this type of technology. 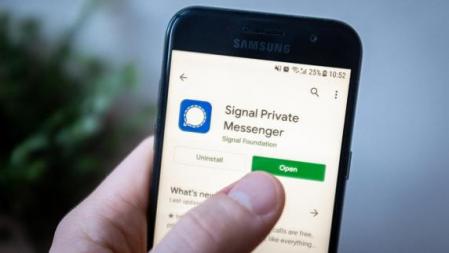 This is Signal, the app that everyone wants to use