The gay flag is the symbol of openness, freedom and the right to choose one’s own. Know its meaning and origins.

A multi-colored insignia, which looks inspired by the colors of the rainbow, flutters from buildings and public places in many of the world’s largest cities. It’s about the LGBTIQ + flag, also known as gay flag, the quintessential badge of diversity and sexual freedom.

Like any symbol, it has its origin. Here we tell you its history and the meaning of its colors. We will also talk about the other flags that represent other sectors of this same community such as lesbians, bisexuals and transsexuals.

Origin and history of the gay flag

Before there was a flag representing the gay community, members of this group were identified with a pink triangle that referred to the same geometric figure with which homosexuals were marked in Nazi concentration camps during World War II. .

Years later, as part of the Gay Freedom Day march in the late 1970s, activist Harvey Milk wanted to create a symbol with which this group could fully identify. So he went with designer Gilbert Baker to create the flag for the gay community.

The first design had eight colors: pink, red, orange, yellow, green, turquoise, blue, and purple. Baker explained his decision to include so many colors:

“The rainbow is perfect because it fits our diversity in terms of race, age and gender.”

After Harvey Milk was assassinated, the purchase of flags skyrocketed. The textile industries did not have the capacity to supply pink fabrics, so this color was phased out. Later, the turquoise color was also removed, due to the same causes. Another version says that when the flags were hung vertically on the light poles of the city of San Francisco, the luminosity was confused with that color.

What do the colors of the gay flag mean

Each color has its own meaning, as devised by its creator, Gilbert Baker.

From this flag, over the years other variants began to be designed that represent various groups of the LGBTIQ + community. 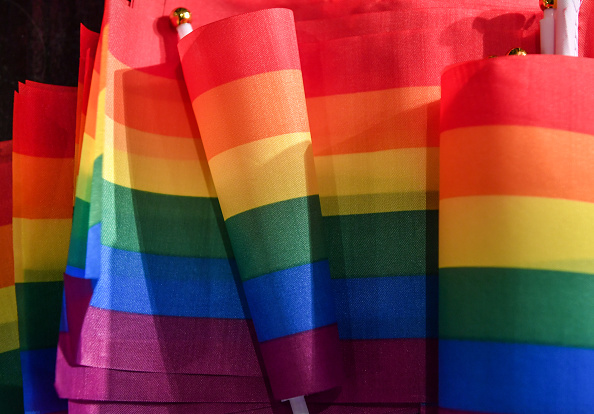 It is the gay or LGBTIQ + flag that has the most versions. One of the most popular is the gay flag but adorned with the astronomical symbols of Venus, which represent women. Another design is a purple background with an inverted black triangle. Finally, in 2010 a design was shown with seven stripes of pink, white and brown adorned with a lipstick mark in one corner.

This fuchsia, lavender and blue flag was unveiled by Michael Page in 1998 to distinguish the bisexual community. Fuchsia represents people who are attracted to people of the same sex. Lavender represents attraction to the opposite sex. Lastly, blue is the symbol of people who like both sexes.

This flag dates back to 1999 when Monica Helms, an American transgender woman, designed the emblem for the trans pride march in the city of Phoenix. It consists of pastel blue that represents masculinity, pink that reflects femininity and white that is neutrality.

It is the LGBTIQ + flag with one of the deepest meanings: gray represents the low desire, or the different levels of desire, that asexuals feel for engaging in sexual ties with someone.

This LGBTIQ + flag was created by the Australian Intersex Human Rights Association in 2013. Intersex people are characterized by having the biological characteristics of both men and women.

This flag represents those who do not identify with a particular sex and who enjoy neutrality. Its creator was Marilyn Roxie in 2019.

Pansexuals are attracted to all sexual conditions and orientation. The blue tone represents men and pink women. Meanwhile, yellow is the representation of the openness that represents this community.

RELATED: Demi Lovato declares herself pansexual: “I’m too gay to marry a man”

Homophobia is related to a low IQ, study says

Happy people: the origin of the word “gay”