One of the hottest rivalries in NXT right now is that of Karrion Kross and Santos Escobar, who will face the next February 24th on the yellow mark.

However, they are not unknown, for They already shared the ring on several occasions, mainly in AAA, where they have been allies and opponents.

The first time they saw each other was on April 12, 2017, when he still Son of the Ghost He was on the technical side and together with Ayako Hamada and Argenis he faced Johnny Mundo, Taya and who at that time had the name of Kevin kross.

Their next meeting was a hand in hand between both fighters, in the table fight format, where Kross was the winner, because an error of the Phantom that struck Texano Jr. it was used by the North American to end the combat. 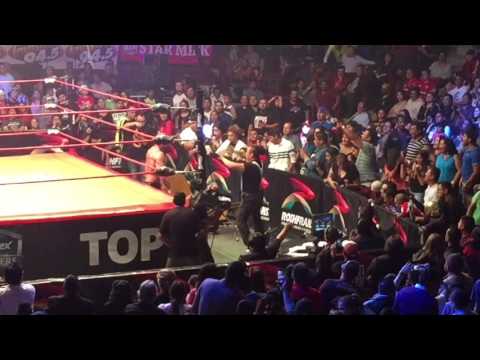 Later, Kross got into the rivalry between the Son of the Ghost and Texano Jr., which would later lead them to a gambling duel. But in Summer of Scandal 2017 The three of them got into a cage to define the challenger for the Mega Championship that Johnny Mundo had then. In that match the loser was Kevin Kross and between him Ghost and Texano declared a draw, so they both went to Triplemanía to look for the scepter.

Kevin Kross and the Son of the Ghost met again on several occasions, almost always with a victory for the Mexican.

Although on October 10, 2018 it was the first time they joined already as part of the alliance between Mercenarios and MAD with Jhonny Mundo, although they ended up falling at the hands of Dr. Wagner, Drago and Psycho Clown.

At EMW they also teamed up with Daga and fell to Brian Cage, Puma King and Psycho Clown.

The last time they shared a ring, it was on February 10, 2019, when together with the Scorpion King, they were defeated by Laredo Kid, Psycho Clown and Puma King.

Finally their paths parted, but now they cross again in Wwe.