Deiveson Figueiredo vs Brandon Moreno 2 will happen later than expected. After Figueiredo and Moreno fought for a draw at UFC 256 in December, it was clear that an immediate rematch was needed.

Figueiredo wants a fight in June

However, the Brazilian was calling Henry Cejudo and the Cody Garbrandt fight is still there. Nevertheless, According to Wallid Ismail, who runs Figueiredo, the champion’s next fight will be against Moreno, but they want it to be in June.

“100 percent, his next fight is Moreno. We are working to make it happen in June. No date yet, but Deiveson wants June”. 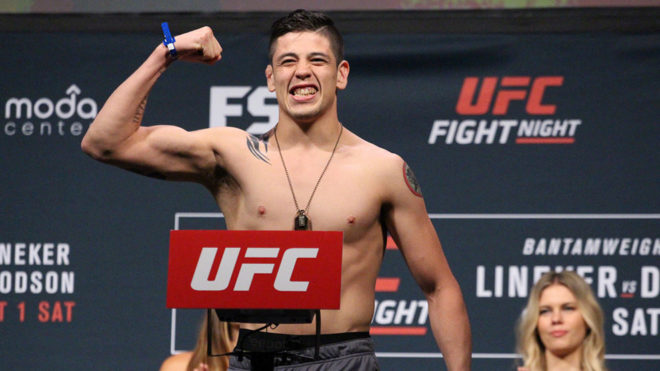 The hope of Moreno and the UFC was to have this fight on the April or May pay-per-view lineup. However, if Deiveson Figueiredo has his way, It seems like it’s too early for him and he’s looking to fight in June. It is uncertain whether or not the fight would headline a PPV. The June pay-per-view date has also not been announced.

Deiveson Figueiredo had a phenomenal 2020 despite making weight in February. He was set to fight Joseph Benavidez in the UFC Norfolk main event for the vacant title, but he didn’t make the weight. He ended up winning the fight by knockout. They then rematched in July and he scored a submission win to win the vacant belt. The Brazilian then fought Alex Perez at UFC 255 and earned a first-round submission win.

Brandon Moreno, meanwhile, surprised many with his performance against Deiveson Figueiredo. Many experts thought that the champion would go through the Mexican as he did with Benavidez and Pérez, but that was not the case. Prior to the title fight, Moreno beat Brandon Royval at UFC 255 to extend his undefeated streak to four. He beat Maikel Pérez in LFA, fought Askar Askarov to a draw and then beat Kai Kara-France and Jussier Formiga.

Their first round was a competitive affair, but referee Jason Herzog’s point deduction kept “The Assassin Baby” out of the losing column. while overshadowing some questionable points from Judge Junichiro Kamijo.

Nothing is official at this point, but their 125-pound rematch is likely to take place in Las Vegas (APEX) or Abu Dhabi (Fight Island), as the promotion continues to chart its schedule of live events for the remainder of 2021.

Figueiredo has deviated a bit from this path when he recently promised a quick knockout of former UFC bantam and flyweight champion Henry Cejudo if given a chance to fight.

It could be for weight reduction reasons. Figueiredo has had a history of not making weight for title fights at the flyweight limit before. He lost the weight for his first title fight with Joseph Benavidez in the main event of the Norfolk undercard in February 2020.

Figueiredo and his team could also be looking to get a large poster with many big names now that you are getting pay-per-view points.