It can be said that Tay Conti was not too surprised his dismissal from WWE last April, despite occurring in the middle of a pandemic. Because the Brazilian was already looking to leave the company months before, considering that it was not giving her enough time on the screens, after four years there and a very remarkable learning of the fundamentals of wrestling, a completely new discipline for this consummate judoka.

AEW kept an eye out last spring as it followed that massive wave of cuts at McMahonlandia, clinching three valuable names: Miro, Serena Deeb and Tay Conti. Of which, without a doubt Conti is the best hiring, taking into account his age and the possibilities opened up by the fact that, unlike other examples of ex-WWE competitors, he looks like a blank canvas, free of any comparison with his previous stage , where it could barely shine.

And we do not know if Conti will reach stellar heights within AEW, but for now, yes at least it has considerable exposure, with a starting attempt under her belt for the NWA Women’s World Championship, or some winning statistics that if she continues along the same lines, may lead her to challenge Hikaru Shida soon. 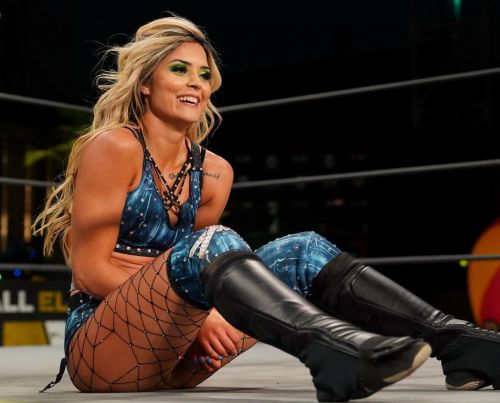 This ability for AEW to create its own figures will be key if the company is to leave a true legacy. And in Conti’s case, according to Dave Meltzer, it’s already coming true. Under the latest installment from Wrestling Observer Radio, the journalist had the following words towards the gladiator for her recent fight against Nyla Rose in the quarterfinals of the women’s tournament which will decide Shida’s opponent in AEW Revolution 2021.

«Tay Conti’s match against Nyla Rose was really good. It’s been a few months since she was fired from WWE and at that time I thought she had a great image and that she had been there for years, but her performance in the ring did not look good. So AEW hires her and the thing was to know if she could be a star. It hasn’t been long and now everything he does looks good and he looks like a star. This is the best match I’ve seen from Tay Conti. This woman is a fucking star».

New fav gear 😍 I already ordered a new one though hahahaha pic.twitter.com/GFoC60uw38