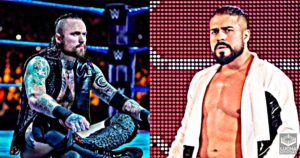 and there have been rumors suggesting that there are plans for them when they return. According to one report, WWE has big plans for Black’s return to the SmackDown brand, but Dave Meltzer’s latest report cast serious doubts on his future with the company.

Andrade and Aleistar Black with a sad future in WWE

During the last Wrestling Observer Radio, Meltzer was asked if there was a possibility of revitalizing Aleister Black, as Paul Heyman seems to have more power on SmackDown.

Meltzer said: “He doesn’t have that kind of power right now. If I had power, yes, I could see it. But he doesn’t have that power and Vince doesn’t see anything in Aleister Black or Andrade. Remember the boys… when Heyman lost his position and I said the boys are screwed. The only one who ended up not being completely screwed over was Shayna because as a guest they liked the idea of ​​Shayna and Nia Jax so they brought her back. Almost everyone else is with Bo Dallas in catering. “

Black hasn’t fought since losing to Kevin Owens on Monday Night Raw in October. He was recruited for the SmackDown brand, but has not been used since.

Andrade has also been off television since October. His last game was a loss to Angel Garza. If fans are hoping to see these guys get a shove near the top of the card, it doesn’t look good on them right now.