WCW, TNA, WWE and now AEW. Few wrestlers have made their debut on promo screens as spectacularly as Sting in the last quarter of a century with his most famous character, inspired by The Crow.

This Wednesday, the 61-year-old veteran starred in the moment of the night on AEW Dynamite, above the victory of Kenny Omega, when it seems that all that promotional apparatus around “Winter Is Coming” was aimed at its debut, with an entrance video attached to that artistic design traced to that of the Game of Thrones series.

And to put the icing on the cake, AEW announced that next week, “The Vigilante” will take the mike, already as an official member of the company.

. @ STING HAS ARRIVED IN ALL ELITE WRESTLING!
Watch #AEWDynamite NOW on @TNTDrama pic.twitter.com/NMLGKqdQtX

► Nostalgia for a golden age

One might wonder if AEW does not lack its avant-garde essence with such a recruitment, but in any case, we are facing a brilliant marketing strategy, endorsed by Pro Wrestling Tees. 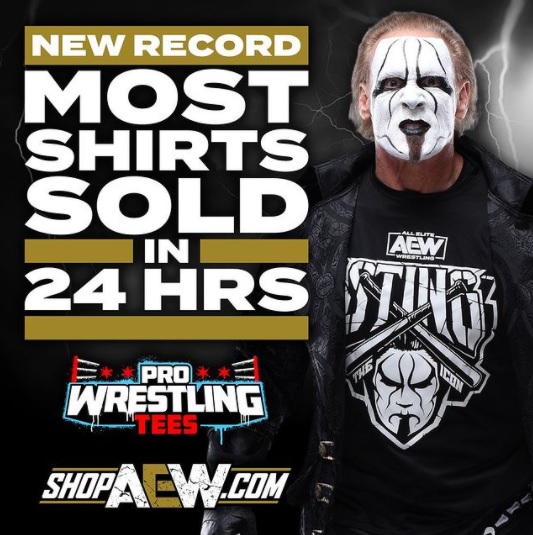 And the article company notes that not even 24 hours had passed yet. An indication that, despite accusations to WWE of an exalted nostalgia in their product (now it is supposed to be reduced as a result of The Undertaker’s retirement), AEW also knows that the present and the future are not yet as effective values ​​as the past, despite good audience numbers..

Although as we pointed out a year ago, surely to play in the big leagues of Raw or SmackDown, it takes something more than Omega and Jon Moxley of stars. For example, in addition to a wrestling legend, a basketball legend, the case of Shaquille O’Neal, who seems could soon face Cody Rhodes.

The Young Bucks recognized the need for new incentives in order to take a leap under a recent interview.

«I buy it 100%, because we need to attract more looks to our product, and it’s certainly a way to get hold of fans who probably wouldn’t see AEW Dynamite. He’s a celebrity, let’s face it, and he has a lot of fans. So it will probably attract a lot of new looks, whatever you do”.

NEXT WEEK on #AEWDynamite “The Icon” @Sting will speak for the first-time in #AEW!

Watch #AEWDynamite Wednesday at 8 / 7c on @TNTDrama and https://t.co/GdI7QAsxEP by @FiteTV for our International fans. #AEWonTNT pic.twitter.com/gwIBHiY9K7