Home>World>“We will continue with the same firm convictions”

The former councilor of the Catalan Government, Dolors Bassa, one of those sentenced by the trial of the ‘procés’, He has re-entered the Puig de les Basses prison (Girona) at 8:30 p.m. this Tuesday, that he left a month ago when he received the third degree of prison from the Generalitat, like the rest of those sentenced by 1-O. The head of the Court of Penitentiary Surveillance 1 of Catalonia has annulled this Tuesday the semi-release of Bassa and the former president of the Parliament, Carme Forcadell, accepting the appeal presented by the Prosecutor’s Office.

It is planned that Forcadell entered the Wad-Ras prison in Barcelona at 9:30 p.m. this Tuesday. Since last March 9, the former vice-president Oriol Junqueras and the other six pro-independence prisoners have also lived and spent the night from Monday to Sunday in the Lledoners penitentiary.

Bassa has been covered in his re-entry into prison, which he has acknowledged in a brief intervention “that he did not expect” now, but “later”, by dozens of people and by members of the current acting Catalan executive: the Vice President, Pere Aragonès, the spokesperson for the Regional Minister, Meritxell Budó, and for the Minister for Agriculture, Teresa Jordà, and the Minister for Treball, Chakir El Homrani. Bassa has also been accompanied by her sister, Montse Bassa.

“We will continue with the same firm convictions in the face of difficulties. Revenge passes once again above justice“, he declared before crossing the entrance of Puig de les Basses amid applause and shouts of” You are not alone. ” 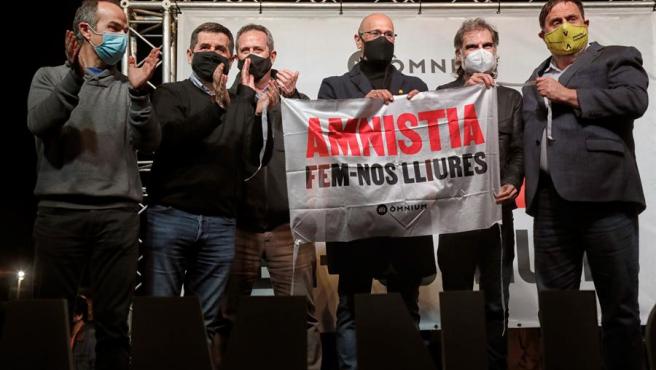 Forcadell appeared at the gates of Wad-Ras at 9.25 pm. With shouts of “President” and “You are not alone”, the people summoned by Dones per la República, the Assemblea Nacional Catalana and Òmnium and some councilors have wanted to accompany Forcadell, who has declined to make statements, but has appreciated the gestures of solidarity.

Bassa and Forcadell lose their semi-release regime for the second time after the Supreme Court’s conviction. On February 15, the day after the regional elections of last 14-F, the Prosecutor’s Office presented the appeal against the third degree that this Tuesday has been revoked.