The new 2020 Toyota GR Yaris is the sportiest and most capable version of the Japanese utility. It has a specific set-up and a three-cylinder engine that develops 261 horsepower, in addition to a new all-wheel drive system. In Spain it is available from 32,900 euros.

The 2020 Toyota GR Yaris has become the king of sport utility vehicles from birth. Models like the Volkswagen Polo GTI, the Peugeot 208 GTI or the Renault Clio RS are one step behind in terms of engine and radical tuning.

This Toyota Yaris is built on two different platforms. The front part has been built on the GA-B of the Japanese brand, the same as the conventional Yaris, while for the rear the GA-C has been used from which the Corolla or the C-HR.

The Japanese brand has ensured that it follows processes very similar to those of competition cars to manufacture each unit of this version of the Yaris. His public debut took place in October 2020 at the Goodwood speedweek, the event that this year has replaced the Goodwood Festival of Speed, suspended due to the coronavirus.

Toyota plans to manufacture a minimum of 25,000 units of this vehicle, which is what the FIA ​​requires to homologate any WRC car derived from a series one. However, from the manufacturer they assure that, if the car is a commercial success, they will produce more.

The 2020 Toyota GR Yaris It stands out for a specific grill, more aggressive bumpers, a series of details in black, a new roof spoiler, widened wheel arches, windows that lack a frame and the presence of 18-inch wheels. These house tires Michelin Pilot Sport 4S In the case of including the so-called ‘Circuit Pack’, the package that raises the sporty tuning of the model to the maximum expression. The brake calipers are gray in the conventional model and red in the units equipped with this package.

The aeordinamic work of Toyota is another key to this GR Yaris 2020, which is the second model after the Supra that adopts these initials. It is one of the reasons why the height is 91 millimeters less than any of the other Yaris.

On the other hand, the bodywork has parts made of polymers reinforced with carbon fiber and elements such as the bonnet, doors or tailgate made of aluminum.

The rear stands out for the presence of an air diffuser and a double exhaust outlet.

The bodywork can be painted in three different colors, precisely the corporate ones of Gazoo Racing. These are white, red, and black. 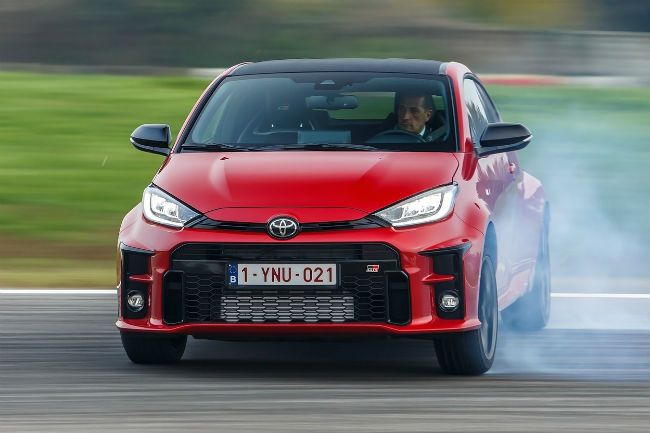 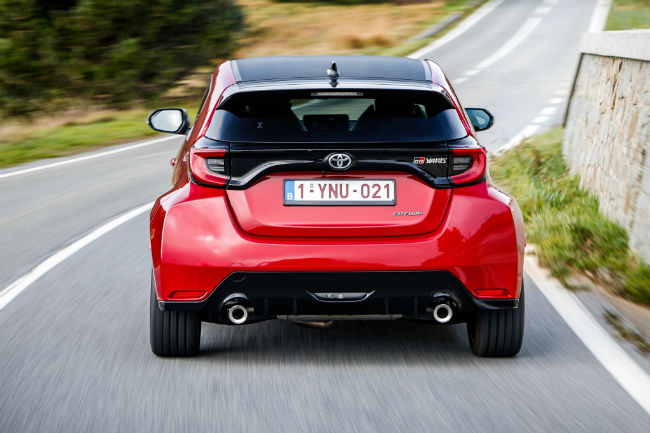 The interior of the 2020 Toyota GR Yaris It has a layout similar to that of the other versions of the model. However, some very sporty cut seats that ensure the best grip – they are not just bacquets – and some pedals with a metallic finish are striking. The brake has an addition in its lower right part that prevents the foot from accidentally slipping under the pedal in the event of a quick maneuver.

The steering wheel bears the stamp of Gazoo racing, also present in a control panel that combines analog clocks with a simple central screen showing various data of interest.

The multimedia system has an eight-inch touch screen.

Both the seats and the steering wheel have contrast stitching in red.

The gear lever is positioned 50 millimeters higher than in the other versions, an effective solution when manipulating it when driving sporty. 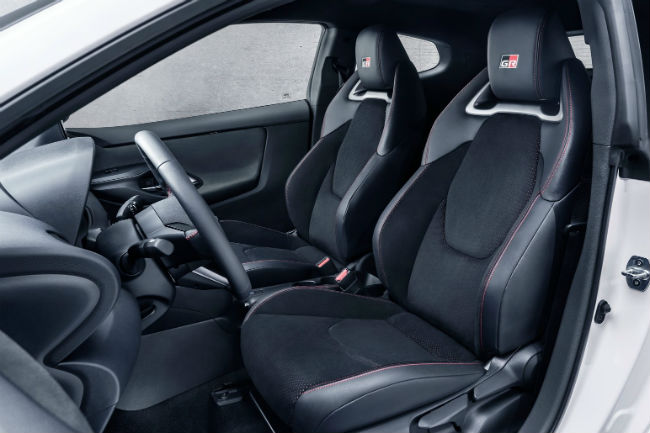 You can add the one known as’Circuit Pack‘, which has 18-inch forged BBS wheels, red brake calipers, Michelin Pilot Sport 4S tires, specific suspension and Torsen-type front and rear differentials. The extra to pay for this package is 5,000 euros.

In other markets there is an extra finish that has elements such as the JBL sound equipment. 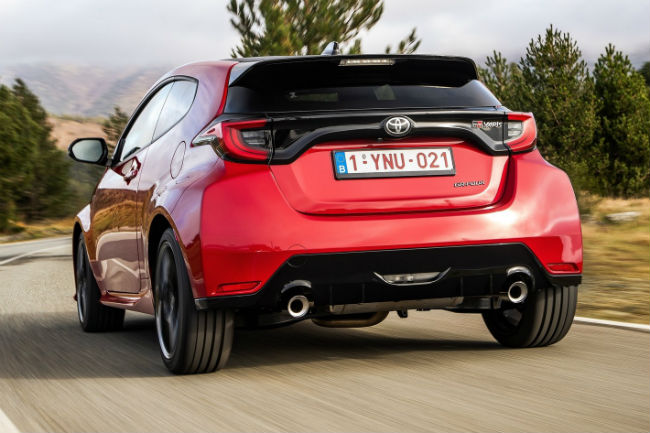 The heart of 2020 Toyota GR Yaris It is a turbocharged three-cylinder engine with 1.6 liters of displacement that is capable of developing a power of 261 horsepower. This is a figure more typical of sports versions of cars from higher segments, such as the Hyundai i30 N or the Ford Focus ST. Its maximum torque is 360 Newton meters and the gearbox associated with the propeller is a six-speed manual.

One of the main mechanical novelties of the 2020 Toyota GR Yaris is its all-wheel drive system, called GR-FOUR. Three different types of settings are allowed. The conventional one offers a 60:40 power distribution, the so-called Sport from 30:70 and baptized as Track from 50:50.

Toyota It also confirms the presence of a specific suspension that varies at the rear. While in the rest of the Yaris it is a torsion bar, in this one it is double triangles. The front remains unaltered with MacPherson scheme 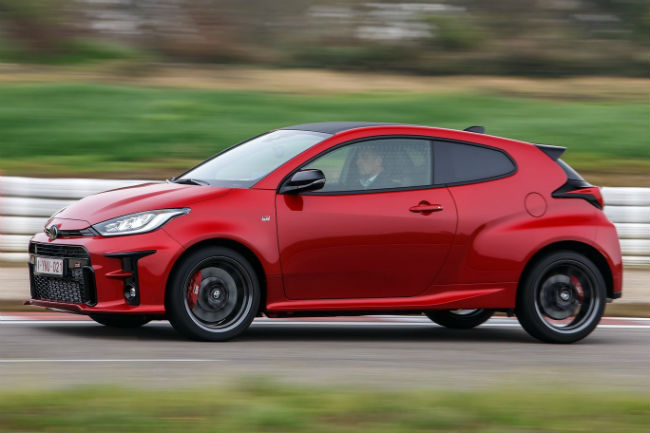 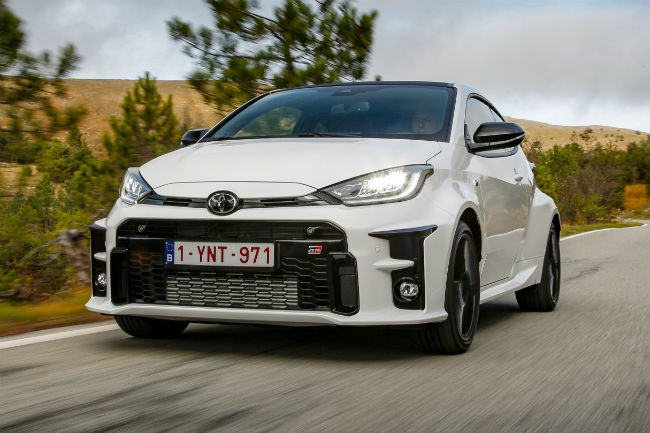 The Toyota GR Yaris It is available in Spain from 32,900 euros or from 37,900 euros if the optional ‘Circuit Pack’ is included.

Toyota Easy financing allows you to acquire it in 48 monthly installments from 250 or 295 euros per month depending on whether or not it includes the ‘Circuit Pack’, after entering 12,854.60 euros with a guaranteed future value of 11,904.70 euros.

The sale process began in July 2020, but now it reaches the entire Toyota Spain network. Production started in August. The first deliveries are scheduled for the end of the year or early 2021.

11/16/2020
We attended the national presentation of the Toyota GR Yaris.

06/23/2020
Toyota publishes a video about the manufacturing process of the GR Yaris.

11/06/2019
Confirmation of your presentation at Rally Australia.