The new Arkana E-Tech joins the micro hybrid variants to complement the range with the ECO label and the environment of 140 hp in gasoline as common notes.

When at the end of March we had the first contact with him Renault arkana we already anticipated that the range would include a E-Tech hybrid variant that we were able to drive today, a complementary version also stamped with the ECO label, which can result in economy of use and environmental compliance given its lower consumption of gasoline … and associated CO2 emissions. It is the one that we were able to discover today and, to tell the truth, it has not disappointed us.

Simplifying things to the maximum, we could say that the differences are given by 1,300 euros more than the Arkana TCe, for an approved consumption practically 1 l / 100 km lower (4.8 l / 100 km compared to 5.7) and a minimal loss of boot capacity, which stands at a very good 480 liters. But the maximum simplification would be reductionist and it does not define the pleasure of using the Arkana E-Tech when it is operating in electric mode, something that can be easily induced by working carefully on the accelerator and according to the official documentation could be located at 80% of the total driving time.

The interior of the Renault Arkana E-Tech

Technically the Renault Arkana E-Tech is similar to Clio E-Tech or Captur E-Tech HEV imminent appearance, not the plug-in hybrid variant (click here if you want to read the in-depth test of this car). As a reminder, this Arkana is made from the CMF-B platform, that of Clio and Captur, although stretched to the extreme, with 2.72 m between axles and 1.56 / 1.58 track width, which allows it to achieve a most proportionate silhouette. This delivery, in addition, introduces new laws of the address aimed at providing a more natural and firm touch, which we were able to verify with pleasure.

The impulse battery, with a capacity of 1.2 kWh, is located under the boot, which means the loss of about 33 liters of capacity and would have the potential for minimum trips in 0 emissions mode … if it were not recharged while driving, it would This can be done by driving one of the electric motors or by gasoline, with indirect injection and 1.6 l of displacement. Together it announces 143 CV that allow it to announce a top speed of 176 km / h, an acceleration from 0 to 100 km / h of 10.8 s and a average consumption of 4.8 l / 100 km that would place it as a competitor of hybrid SUvs like the Toyota C-HR. 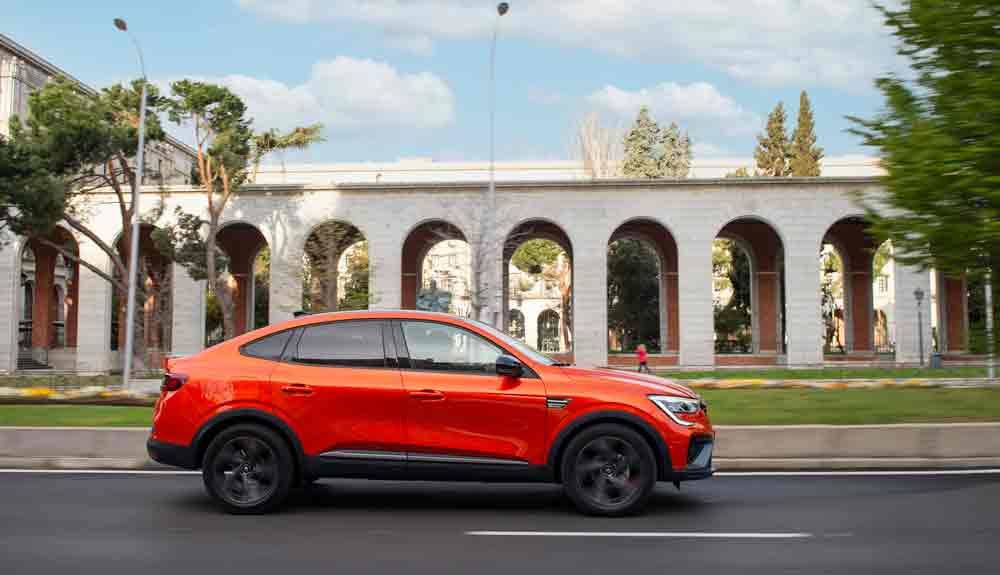 At low or moderate speeds the touchdown travel was usual to see EV indicator that reveals its operation in zero emissions mode. A different matter would be high-speed trips or hard slopes where, possibly, the change in four ratios and the wide jump between them would be evident, despite the assistance of the electric motor at that time. With everything, The 4.8 l / 100 km of approved average consumption does not seem impossible.

Three variants make up the commercial range of the Renault Arkana, in a range of prices ranging from 27,074 to 31,558 euros, discounts included. All include what could be defined as something more than the basic equipment nowadays, such as the rear view camera, Android Auto / Apple Car Play connectivity, safety distance alert and automatic climate control. In the upper ones, there are also elements such as the adaptive cruise control, the instrumentation with the screen enlarged to 10.2 ”, the automatic switching of low beam / high beam, the Smartphone wireless charger and the Multisense driving modes (automatic My Sense, Sport and Eco, which, in addition to power delivery, limits air conditioning — to extremes close to excess with temperatures close to 40º C).