Through a letter addressed to the Attorney General of the Mexican Republic, Alejandro Gertz Manero, Congressmen from the United States assured that they support Mexicans who are waiting for justice in the case of the former Secretary of National Defense, General Salvador Cienfuegos Zepeda, on whom accusations of drug trafficking and money laundering weigh.

The document, which was released by Congressman Albio Sires, through your Twitter account, urges the Mexican prosecutor to conduct a full investigation in the case of drug trafficking against Cienfuegos Zepeda.

The letter begins Dear Attorney Gertz. As constant supporters of Mexico’s efforts to strengthen the State and the law and the fight against corruption, we write to express our strong interest in seeing justice prevail in the drug trafficking case against General Salvador Cienfuegos Zepeda “. 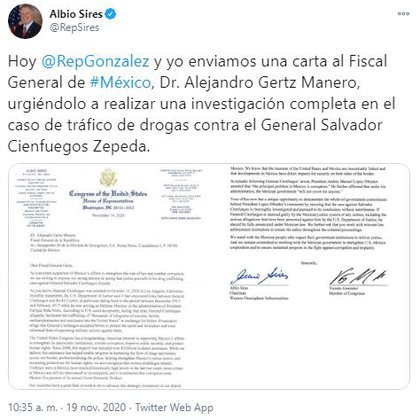 In a second paragraph, the US legislators point out that the Mexican General was arrested on October 15 at the Los Angeles, California airport, due to the accusations made by the Attorney General of that country, that Cienfuegos Zepeda was related to the Cartel H. -2 in the period from December 2015 to February 2017, when he was Secretary of National Defense, in the government of President Enrique Peña Nieto.