Mythical matches, millionaire signings, finals that paralyzed the country almost like a pandemic … And thousands of nights with the Spanish glued to a transistor. ‘Kings of the night’ is not just for football fans, that also. In its history there is a breath of clear nostalgia, a scent of a fragrance that transports us to almost three decades ago.

A time when journalism was forged in crowded newsrooms and the list was changed at the last minute by a sudden ticker. Nothing was known about laptops and news at the click of a button. In those years when exclusives were not made via social networks. The passion for football will not have changed (football is like that, some say), the way of communicating it, yes.

In ‘Reyes de la noche’ the characters are fictitious, but everyone will see the SER, or COPE, or names of top journalists in Spain referenced there. In the background totems related to Spanish football: Real Madrid, Calderón or Jesús Gil. Head on, a story between two rivals.

Christopher Garrido Y Adolfo Valor they create a fiction based on two giants of the airwaves, José María García and José Ramón de la Morena. Inspiration is clear. Football fans will catch a glimpse of various references to historical plays.

There can be the nostalgic halo of an era. But the truth is that ‘Reyes de la noche’ reflects much more. The Movistar series is the portrait of an era that many will longingly remember, but which contained many more cons than pros. Melancholy sometimes has that defect: it disfigures reality. There you can see a country in which corruption is rampant and machismo is stagnant in the world of work. A few years in which decision-making was finalized in the Donostiarra Asador, where those with power do whatever they want under the permissibility of society. All this with a lot of smell of tobacco, and therefore with a lot of smoke, the one that seems to cover the least beautiful of the sacred sport.

In all that criticism there is a plot thread that contains drama, some black comedy and to a certain extent a thriller. The introduction is very obvious and a very good starting point for what it is going to deal with: in several Spanish homes, late at night, the listeners – basically all men – get ready to tune in to the station to hear the voice of Francisco Javier Maldonado , alias Paco el Cóndor.

The creators want to show what the journalism of yesteryear was like as well as teach how to take desperate measures to keep the job. A world of climbing, full of testosterone, where men rule. Sorry, the soccer boss. 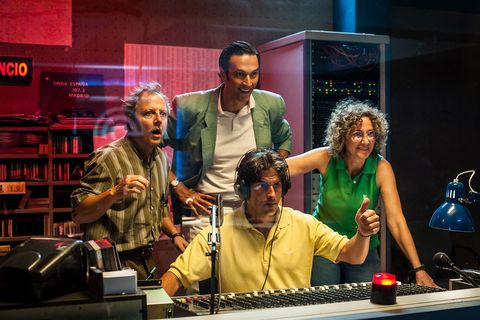 However, the characters that are a gift for any interpreter, roles perhaps somewhat stereotyped but defended with the best interpretations. Captained by Javier Gutierrez Y Miki Esparbé, the cast is ten, as are the dialogues and scenes.

The series exudes a style that we know and have lived. From the broadcast of a game with spades to the meeting of a team in front of a program. Going through a difficult interview or meeting with the King of Spain. Juan Carlos, yes. A time that seems like yesterday but almost three decades have already passed. The early nineties that for many will continue to be a reference. However, we have evolved something. Or not?

If in doubt, take a look at the series. Movistar Plus arrives this weekend. Check your screens to see if this is old-fashioned, or is in the most rabid actuality.