Mónica Ocampo: we break stone and the new generations must take advantage of all that effort

14 years ago, Mónica Ocampo scored the most recent goal of the Mexican women’s team at the Azteca stadium, now with the return of the tricolor to the Santa Úrsula venue and despite not being part of the call, she celebrates the evolution of women’s soccer and the importance of having spaces for the development of this sport.

It took a lot of work for those of us who broke stone and now in the end we enjoy some things, the new generations enjoy a League, a team, they should take advantage of all that, he said. Now those who are in the selection I hope they enjoy the experience and do their best, they are in a great process, he added.

Wearing the shirt of the Mexican women’s team, Ocampo last set foot in the Azteca stadium on June 5, 2007, in a friendly match where they beat Panama 3-1. After a long wait, the women’s representative will be able to be the protagonist again in the largest venue in the country, now in another preparation match against Costa Rica and under the command of Mónica Vergara, the first female coach of the team.

Despite the fact that few fragments of that distant encounter remain in Ocampo’s memory, the now Pachuca player recalled that there was very little fans in the venue, but we felt sheltered. The contrast with this image is strong when noting that currently the fans support women’s football in the League and have even filled stadiums like those in Monterrey.

But at a time when there was no professional league and it was difficult to do a view of players, the field was the least of it. Although playing in the Santa Úrsula building was always a plus in motivation, we focused on doing our job, whether it was in a stadium or in the High Performance Center, said the midfielder. 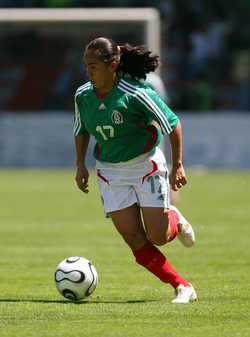 ▲ Ocampo, who 14 years ago scored the most recent goal for the women’s Tricolor at the Azteca stadium, celebrated the return of the national team to the Santa Úrsula venue. Photo Jam Media

However, he acknowledged that it is very important for the development of women’s football that the team plays for Azteca and can be measured against that type of rivals.

In an analysis of the current situation of women’s soccer, Ocampo stressed that the work of the Liga Mx “is beginning to give results in El Tri” and as proof are the new talents called up by the coach Mónica Vergara.

The change in women’s football is very important, there are new faces and everything is part of the effort made in the League, that the players are always active, working with a good rhythm has helped a lot, he said.

Before we used to prepare for a game for just two or three months, now we practice every day. With the League we have those spaces to develop ourselves.

Just a couple of years ago, Ocampo was a teammate in the team of Vergara, recently appointed technical director of the Tricolor. The Tuzas midfielder sees this designation as a sign towards a growth path.

I admire Monica a lot, I know she will do a great job. Also, it is very important to see more women now in those leadership positions; Eva Espejo (sports director of Pachuca) is also there. That inspires us because you finish your career and think about doing other things, but I want to continue focused on football and now with all the opportunities in the League, it motivates us to aspire to one of these positions, he stressed.

After suffering an injury last year, Ocampo began to have regularity on the court with Pachuca. The player acknowledged that they are undergoing a process of adaptation now that the Spanish and world champion Toña Is took over the helm.

They are different things from what we have been doing, we are adapting, there is confidence and the team is progressing.