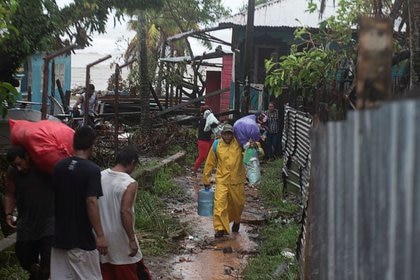 People carry their belongings as they head to a shelter as Hurricane Iota approaches Puerto Cabezas, Nicaragua. November 16, 2020. REUTERS / Wilmer López. ATTENTION EDITORS – NOT AVAILABLE FOR RESALE OR ARCHIVE

Iota, which became a category 5 hurricane on the Saffir-Simpson scale, made landfall in Nicaragua late Monday with a level 4 and sustained winds of 250 kilometers per hour, causing panic in the isthmus, still hit by the effects of cyclone Eta in early November. (Full Story)

By 2100 GMT, it had turned into a tropical storm with maximum sustained winds of 95 kilometers per hour and was moving west at 19 kilometers per hour, according to the United States National Hurricane Center (NHC, for its acronym in English). ).

The cyclone was passing through northern Nicaragua, where according to local media two drowned minors died, although the authorities have not yet confirmed the deaths, to then head south to Honduras at night and finally dissipate near El Salvador early Wednesday.

Puerto Cabezas, on the north coast of Nicaragua and still partially flooded and covered in debris from the force of Hurricane Eta two weeks ago, again endured the worst part of the storm. Scared residents huddled in shelters and worried about food and their lives.

“We could die,” Inocencia Smith said. “There is nothing to eat,” he said, referring to the farms in the area that were destroyed by Eta.

The wind ripped the roof off a makeshift hospital. Patients were evacuated, including two women who gave birth during the first rains of the storm on Monday, Vice President Rosario Murillo said at a news conference.

About 40,000 people were transferred to shelters, said authorities of that nation, where 33 municipalities are without internet and without cell phones. Many coastal areas are at risk from storm surges of up to six meters.

“We are flooded everywhere, the rain was almost all night,” the mayor of the Wampusirpi municipality, Marcelo Herrera, told . in a telephone interview. “We need water and food for the population, because with Eta we had lost the crops.”

Meanwhile, the director of the Nicaraguan Institute for Territorial Studies, Marcio Baca, said it was the most powerful hurricane that has impacted that country since there are records.

In Honduras, where 70,000 people were taken to shelters, authorities reported that the rains continued in most of the country and evictions in risk areas continued. In the department of Colón, on the Atlantic coast, rivers overflowed and several cities flooded.

In the capital, Tegucigalpa, the authorities closed several bridges that connect the city with the populous and overcrowded Comayagüela area, given the risk that the flooding of the current of several rivers due to rainfall causes overflows.

Iota passed near Providencia, one of a group of islands in the Colombian Caribbean department of San Andrés. Local authorities reported two people dead and one missing.

“It is the first time that a category 5 hurricane has hit our territory,” said the president, from the island where 98% of the infrastructure was destroyed.

“The shelter spaces, the alert mechanisms led to the community not having a substantial impact from the point of view of human losses,” added Duque.

In Panama, the Government reported a deceased person and a disappeared person in the Ngäbe-Buglé indigenous region, due to the storm that affects the country partly associated with the Iota pass.

It is the first time that two major hurricanes have formed in the Atlantic basin during one November since records began in 1851. Iota is the first Category 5 storm of the hurricane season.

“We are in God’s hands. If I have to climb trees, I will,” said Jaime Caal Cuz, 53, a farmer from the Izabal province of southeastern Guatemala. “We don’t have food, but we are going to wait here for the hurricane, we ask God not to come.”