The initial rhythm was very low, and the projections if we did not improve it pointed to several years until we could achieve group immunity. That was in the first weeks of January. By the end of that month there were directly delays and autonomous communities that stopped vaccinating in order to ensure the second doses, since no new remittances were arriving. However, and despite other added obstacles such as problems with AstraZeneca or with Janssen, Spain was accelerating its rate of administration of doses and has just exceeded its third vaccination target with three days of delay with respect to the foreseen term, arriving at 15 million vaccinated of complete schedule. Specifically, 15,138,439 from Spaniards.

The first two were exceeded within the set deadline and even with some notice: that of 5 million vaccinated in the first week of May and that of ten million for the first week of June. Apart from the good work of the autonomous communities administering doses, the logistical and manufacturing push that has allowed Pfizer to send more doses than planned, as well as the arrival of Janssen, which in a single dose already adds up to a new complete vaccinated one more to the list. But precisely Janssen’s delay in delivering the last doses It has been the cause of this milestone, which was achieved outside of the deadline, according to the Government’s words.

Next goal: 25 million by the end of July 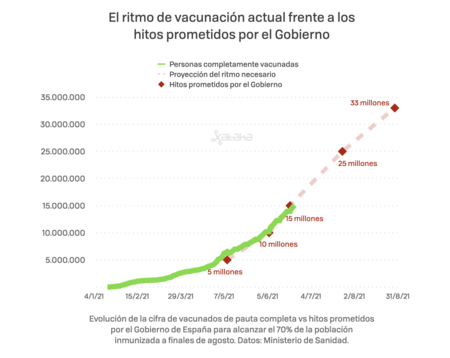 The third objective was the most complicated to date, since it involved an acceleration in the administration of doses with respect to the first two steps. The fourth and fifth milestones – 25 million at the end of July, 33 million at the end of August – mean maintaining a rate almost identical to the current one until then, something that can be achieved with greater ease if we obtain more doses of Janssen and there are no new delays, and where it can be a complication in the case of the summer period, with many citizens outside their autonomous communities by the date they obtain the appointments .

However, some autonomies, such as the Valencian Community or Castilla-La Mancha among others, they are administering doses to any citizen who approaches a vaccination point and is in the age group that is being vaccinated at that time to receive it. Something designed for the displaced, people staying in second homes, families on vacation, etc. 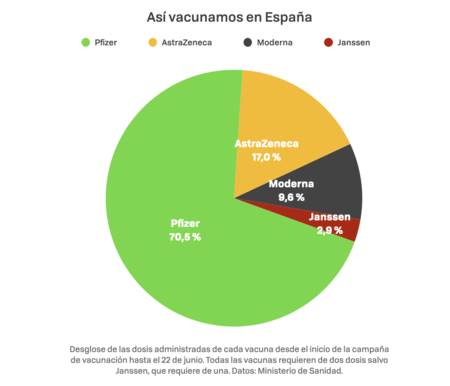 Another circumstance that can help improve the rhythm compared to previous milestones is that second doses of AstraZeneca are already being administered, which began its vaccination at the end of March, and which is the vaccine with the longest time window between both doses. Many people with the first one already received are still waiting to complete the regimen with a second one that is already being administered and it will help accelerate the pace from now on.

The approval and use of the Novavax vaccine, which has an efficacy of 90% according to its latest trials, is also pending. Although for the deadlines it manages, pointing to the last quarter of the year, its role in Spain would no longer be relevant, at least with regard to the goal of 33 million vaccinated (70% of the population) at the end of August.

CureVac could arrive in time for the final sprint, and in fact it already appears in the health reports published by the Ministry of Health regarding the vaccination campaign against COVID-19, although there are still no doses in circulation and the results Preliminary results (which point to an efficiency of 47%) dampen the hopes placed on it.