Last June 2019 Vodafone launched the first 5G NSA (Non-stand alone) network in our country. Two years have passed since then and now the British operator is once again marking a small great milestone: the launch of the first 5G SA (stand alone) core network in Spain. It does so in a pre-commercial way and with a small exclusivity: Samsung mobiles will be the first to access.

As explained from Vodafone, the new pre-commercial 5G core network “consists of a new 5G core provided by Ericcson” which is totally independent of the existing 4G network. Let us remember that there are two types of 5G, NSA and SA, the first being a 5G based on the 4G architecture and the second an independent 5G that, in principle, should offer higher speeds, less latency and bandwidth.

With this launch, Vodafone becomes the first operator to launch a 5G SA network in Spain, although it does so at pre-commercial level, that is not yet commercially available to individuals. On the other hand, Vodafone affirms that this network will be accessible initially through Samsung mobiles. The specific models have not been revealed, but we do know that the terminals have to receive an update to be compatible with the 5G SA network.

Although we will still have to wait for the 5G SA network to reach all users, the truth is that the operator has made a selective deployment in business and industrial environments in the last year. For example, at the beginning of the year provided 5G SA connectivity to a sentinel robot in the “Robot Covid 5G” project that detected whether people were wearing a mask and analyzed their body temperature.

In any case, at a particular level things do not change much. Launching the 5G SA network involves a significant deployment of infrastructure and Vodafone has not ventured to give the date on which they expect to have it operational throughout the national territory. Today, the company offers 5G NSA in 25 Spanish cities and it only covers 50% of the population in them. 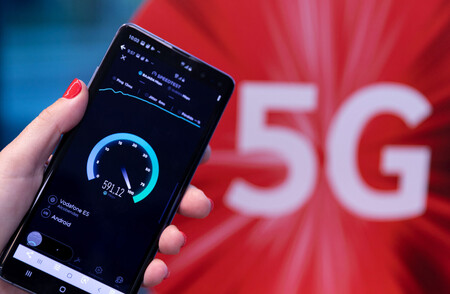 According to Vodafone, the future development of the 5G SA network will allow the introduction of functionalities such as Network Slicing (creation of private networks for companies), Edge Computing (processing of data closer to where it is generated to reduce latency) and Carrier Aggregation (adds two 5G carriers at the same time), as well as having potential applications in augmented and virtual reality. An example is the Nreal Light glasses that Vodafone launched a few weeks ago.

And what are the differences between the 5G NSA and SA? If we stick to the 5G standards of the 3GPP, the 5G SA should offer at least 20 Gbps speed, a latency of one millisecond and support for up to one million devices per square meter. The 5G NSA, for its part, remains in 2 Gbps downstream and a latency of 15 ms with an upload speed limited to 150 Mbps, which is the same as 4G +.

However, for its deployment to take place, it will be necessary that the 700 MHz band was auctioned, an auction that is scheduled for next July 21 and whose starting price will be 955.50 million euros. Be that as it may, it seems that there is still time for the 5G SA to be a reality of the day to day, but today it is a little closer.