During the last few years, the television manufacturer Vizio has made a niche for itself in the market with an interesting strategy: televisions with a superior quality in relation to their cost. And the profit? In lto publish what appears on these televisions, so much profit that it generates almost as much income as selling the TVs themselves.

As Engadget indicates, the company has published in the last hours its financial results for the last fiscal quarter. In them, the 48.2 million dollars he has earned from selling devices stands out. However, even more remarkable are the 38.4 million dollars that come from ‘Platform +’.

Platform + is the division of Vizio that is responsible for the collection and sale of user data to generate personalized advertising for users. In other words, the system that displays advertisements on Vizio televisions. As a context, the sale of devices grew by 7% in the last year, while the revenues from Platform + did so by 152%. 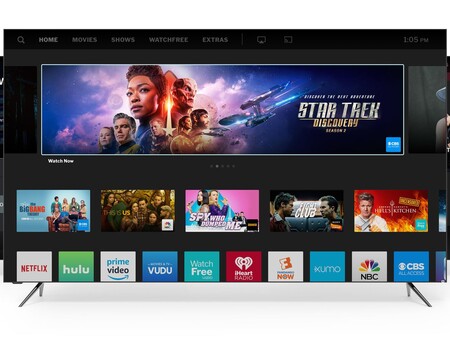 The system is part of a larger suite called SmartCast. Through the SmartCast ecosystem on Vizio televisions, the company collects information about user viewing trends. On the other hand, it also offers services like Netflix taking a commission from it. Finally, there is the fact of offering personalized ads to each user, depending on the tastes that each one has.

Vizio indicates that there is 13.4 million accounts on SmartCast right now. Users spend 52% of their time using TV within SmartCast. That is, using a SamrtCast app that allows Vizio to collect information and serve ads. They say that another 34% of the remaining time is simply watching linear television and 7% of the time playing game consoles or connected other devices.

The Vizio content recognition In recent years, it has allowed it to build an entire ecosystem that can offer services like these. They say that they will continue to establish relationships with brands and agencies to take advantage of this technology and get more benefit from it. The user, in any case, can choose not to participate in this.