Virgin Orbit has done it again, has put up to siete satellites by launching them with your airplane + rocket method. A method that he has been developing for years and finally has it ready for commercial applications. Unlike the powerful rockets that SpaceX or other companies need, Virgin Orbit uses a Boeing 747 aircraft.

Based on the airdrop, Virgin Orbit relies on modified Boeing 747 aircraft and specially adapted for these missions. After previous tests, the company has finally carried out its first commercial mission. Seven satellites from three different countries have been deployed by Virgin Orbit in the last few hours.

From airplane to rocket and then to space

To carry out these missions Virign Orbit makes use of a plane + rocket combo. The plane has a small rocket at its bottom which is launched when it is at the limit of the atmosphere where the plane can reach. The last kilometers are made by the little rocket with the payload to be launched into space.

The rocket is called LauncherOne and when it is almost 14 kilometers above the surface takes off from the plane to continue on its own. Composed of two stages, it burns the first during its exit from Earth and the second minutes after it reaches space. Once it reaches the desired height, drop the payload. Meanwhile, the plane returns to the ground and lands like any other. 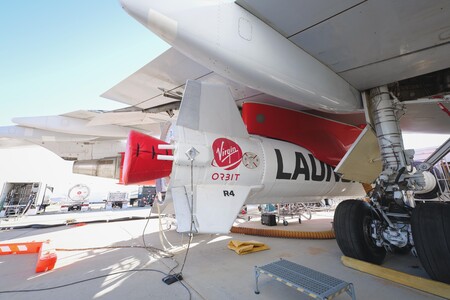 This is actually Virgin Orbit’s third flight trying to put satellites into orbit. The first was carried out in May 2020 although it was not completed successfully as the rocket did not turn off after separating from the plane. In January 2021 we saw a second attempt that did allow us to successfully carry payloads into space. Now it has achieved it for the third time and no longer as a test but as a trade mission.

The company expects to make one more launch in 2021 and up to six launches in 2022. They say they have enough launch deals going forward. It is a launch method that is convenient for companies looking to place small satellites in space, as it can be cheaper and more accurate than using vertical rockets. Of course, it is nothing compared to the 143 satellites launched by SpaceX in a single mission.