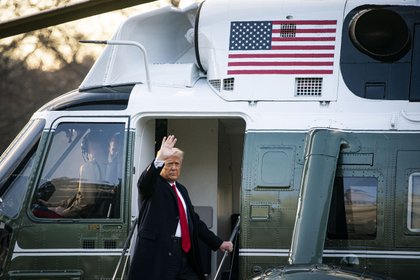 Former United States President Donald Trump has assured that he will do “something, although” not yet “in his first statements after leaving the White House in which he has not released more details about his future plans.

Trump, who left the official residence a few hours before the inauguration of his successor, Joe Biden, as the country’s new president, was seen for the first time at one of his golf clubs in Florida this Friday.

“We will do something, but not yet,” he explained to a Washington Examiner reporter, as he sat down to eat and before one of his advisers cut off the interaction between the journalist and the former president.

Trump has hinted that he is proposing to run as a candidate in the 2024 presidential elections, and has even proposed the creation of a new party, the Patriotic Party, after the disagreements he has had with the Republican Party in its final stage as president. .

A few hours before these first words, the US Senate confirmed that the impeachment trial will begin the week of February 8, despite Republican attempts to postpone it until the end of the month.

Trump will face impeachment to prevent him from running for a position in the public administration for his role in the takeover of the Capitol on January 6.

There is some consensus among both Republicans and Democrats that the words of the one who was still president in a speech encouraged a mob of his followers to storm the iconic building, however it is uncertain that enough Republican senators – 17 needed – will support the impeachment process.