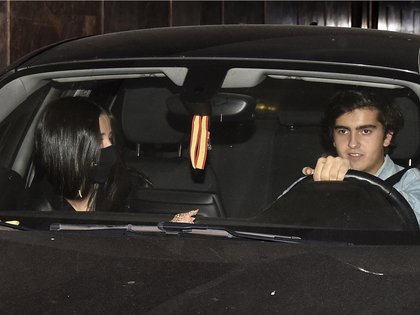 The daughter of the Infanta Elena attended, with friends and without wanting to talk, to her boyfriend’s new night engagement, in a central Madrid venue

Located in the spotlight due to her busy social schedule despite the complicated health situation in our country, Victoria Federica has reappeared at a nightly event days after attending the massive funeral of Carlos Catalán. On this occasion, the daughter of Infanta Elena attended with several friends to support her boy, Jorge Bárcenas, in a new professional DJ engagement in a central venue in the capital. Embarrassed at grabbing the attention of the press, the it girl preferred to remain silent and avoided confirming whether it is true that her uncle, King Felipe VI, has given her a wake-up call for her busy social life.

After several hours inside the party, Victoria Federica and her boyfriend, Jorge Bárcenas, left the premises by car and turned a deaf ear to questions from the press.

Both Victoria Federica and her brother Froilán have been highly criticized for the misuse of masks in public places and the failure to comply with social distancing since both have continued with their lives outside of the prevention measures against Covid-19. On this occasion, the daughter of Infanta Elena and her boyfriend did comply with the established rules by returning home a few minutes before midnight when the ‘curfew’ is implemented in the Madrid capital, since many information points to a possible wake-up call from the King to his nephews for their behavior in public.

Apart from the judicial investigation to which King Juan Carlos is being subjected for alleged tax fraud and the use of ‘black cards’, Victoria Federica prefers not to comment anything with the press since her own mare is being the subject of this investigation.