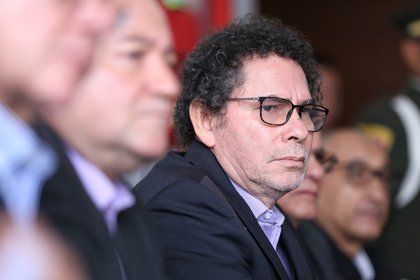 Bogota September 23, 2019. Former leaders of the FARC – EP guerrilla gave a press conference to public opinion regarding the voluntary appearance in case 001 in the room of the Special Jurisdiction for Peace – JEP. In the photo: Pastor Alape. (Colprensa – Camila Díaz)

The program of NTN24, La Noche, revealed this Friday how much money the Autonomous System of Advice and Defense (SAAD) of the Special Jurisdiction for Peace (JEP) has invested in the legal assistance of the ex-combatants of the Farc-EP and in the victims accredited to the Court. The document accessed by the newsletter shows that in total this body invested more than 12,000 million pesos.

According to the testimony of Sebastián Velásquez, representative of the Colombian Federation of Victims of the Farc (FEVCOL), collected by La Noche, to said association “they have only given coins” while the Farc have been given “millions and millions “Besides that they have not had support from the JEP, he stresses. They also include in the newscast the testimony of a victim who affirms that his colleagues have been told from the Court that if they do not have lawyers they are out of case 01.

The claim also indicates that the assigned lawyers are pressuring some victims of the Farc to give them legal power and representation. Ximena Ochoa, one of the visible heads of the victims of the Farc guerrilla, clarified that “this is not true. The magistrate who handles the case that is not going to be closed. And lawyers don’t have to pressure victims to sign power of attorney. That is a breach against ethics, lying to a client so that he gives them his signature ”.

On the other hand, a division of the total money is made for each veteran, amount that in addition to focusing exclusively on hiring lawyers, is also allocated to different aspects that maintain the operation of SAAD as administrative, technical, financial and cooperation expenses.

In fact, in August of last year a contract was known (342 of 2020) in which an investment of 4,930 million pesos by the JEP appeared to hire 93 lawyers on behalf of the ex-combatants, so it was returned to speak of an imbalance with respect to the victims. The Colombiacheck checking portal learned that the Peace Tribunal has repeatedly offered victims’ organizations legal advice and accompaniment by the SAAD. However, some have not accepted taking into account that it is optional and that they can choose to have a personal or trusted one. This represents an imbalance in the conditions for the more than 200,000 victims, for federations such as FEVCOL.

The claim of groups like FEVCOL also has to do precisely with the conditions of trust and guarantee to face the processes with accredited representatives that the victims choose. Sebastián Velázquez, legal representative, warns about the 5-month time that the JEP has taken to analyze its proposal, that among 12 accredited there is only one organization of victims of the Farc, and also calls attention to a possible conflict of interest of the assigned lawyers, such as the Yira Castro Legal Corporation. “Someone who represents the victims of the State is not going to have the same attention to handle the victims of the Farc,” said Velázquez.

Regarding the version according to which FEVCOL had not submitted documents for accreditation to the JEP, in the response to a right to petition, from La Noche to the court, it is found that said documentation was sent on October 17, 2020. According to this , the application is still under review.

Faced with the situation of the victims who, because they do not have a lawyer, could be excluded from the case, the Peace Tribunal explained that the victims have five options to participate in the different instances and procedural moments in the JEP and, among these, is doing it themselves themselves, “that is, in a personal and direct way without the need for a proxy.” In any case, on this possibility, organizations of victims of the Farc like FEVCOL recognize themselves at a frank disadvantage compared to the perpetrators and do not consider it as a solution.

Defense Minister Diego Molano asked the JEP to take into account the official figures of the ‘False positives’ Juan Manuel Santos says that he is willing to tell what he knows about the false positives before the JEP Know the flexibility of measures in Bogotá after the second peak of the pandemic: there are also regulations that continue