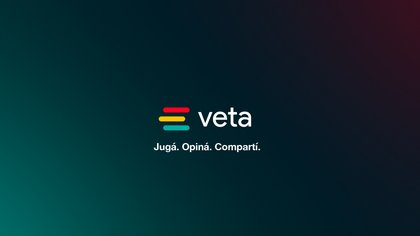 Axel bosso He is a psychology student and a few years ago he entered the world of gaming through journalism. German Raffo has a similar career, but is a graphic designer. A few months ago they began to talk about the possibility of developing a platform in which users can write reviews about video games or read the opinions of other people, whether or not they have professional knowledge on the subject. All this in a “toxic free” environment and with zero tolerance for any violent expression. Thus was born Vein.

“We started talking about this in October of last year more or less. One day Germán put his backpack on his shoulder and a week later he told me “I did this”. And you could go in, start testing functionalities ”, explains Axel. Germán was in charge of development, although he never did it professionally or does it. “From one day to the next the idea came up, we talked about it and it was a week that I was totally erased,” he says about that initial instance.

They started with a round trip, testing and the implementation of the first tools. Then came the testing instance, in charge of some friends and family who were on fire with the proposal. Many of the returns they received at that stage became a part of the site they launched. 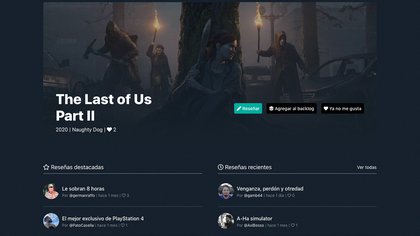 How did the need to generate this space arise in you?

Germán Raffo: It is a model that already exists with other industries, such as cinema or books, but it did not exist locally with video games. It emerged seeing the panorama, reading many comments on social networks from people who do not have a space, but do like to write and talk about video games. We saw that opportunity to generate the place. Luckily it didn’t exist and we could do it ourselves.

How was the reception after the official presentation?

Germán: It was very positive. The platform, although we both thought about it, I was in charge of the programming. I am not a professional developer and was very afraid that something might come out more. So what we had thought about was to make a quiet launch, precisely to avoid any problem and that something breaks. And luckily it had a lot of movement and we had a lot of support from friends and fellow communicators and communicators.

The presentation of Vein They did it through twitter where they described it as a platform to “search for your favorite games and write about them freely”. In addition, users have the possibility of putting together different lists to group their own reviews, the favorites they have read or those they have pending. The spirit is of a social network, a space made “by and for players”, where the profile of each one will function as a cover letter, a “gamer profile”.

Among its central objectives are also raised the challenge of creating “a community free of toxicity” and establish a zero tolerance policy with all users who attack others or who generate racist, xenophobic, sexist or discriminatory expressions. The idea is that no one is exposed to a situation that is harmful to them.

You speak of the generation of a community. Is the idea to extend the experience on other platforms?

Axel Bosso: I don’t know how far Veta is going to go. But we would like it to be a place where you can also see articles, notes or featured content from other sites of people who talk about this topic. That there is an open community, that we do not simply close ourselves in one place. That everything is shared, that each person can see a lot of content. It’s a challenge thinking of all the content creators that came out last year. There are a lot more people writing, podcasting, channeling on YouTube, or streaming on Twitch. You mentioned the growth that the gaming universe had in 2020 and how it had an impact on content generators. Do you think it can work as a showcase for those who are starting that path?

Germán: That is the kickoff. We want it to be a space for those people who play video games and perhaps due to ignorance or insecurity do not want to start their own project. Here they can start writing and developing a portfolio. Within your Veta profile you can write reviews or comments and you can create your “gamer profile”, where you will have lists the games you bought and have not played yet, create lists of reviews that you have liked.

In the presentation of the platform they not only put a great focus on the need to generate an environment without toxicity. Also the writing of this presentation is aimed at men and women.

Germán: Being part of the community, one knows, knows what is said, knows the vices that many media, communicators and the community in general have. From the outset we wanted to make it clear that it will be quite rigorous. In fact we are working on a system to be able to report content that is not compatible with the spirit of the site. To avoid racist, sexist content. We want to try that one in Veta can feel completely free from positive freedom, not that one can say what they want with total impunity.

Axel: An important point in this is what we continually experience as journalists or people who write about video games. When you see journalists with a lot more experience who, for example, start to get harassed just because of the score they give a video game. All of this is enhanced when you are a woman and you cannot even play online, because when they see your nickname or hear your voice, a series of attacks begins. Things they tell you just because you’re a woman. So it is good to start building platforms that foresee those situations of movement. I find it interesting that this is the base and then let’s see how far we want to go. You just said that we speak to men and women and it made me think that there are more identities and how we could integrate them. It is a constant learning.

Where is the project going? Are they open to proposals that arise from the community itself to expand to new formats?

German: Today Veta is this, but tomorrow maybe we can articulate it with audiovisual content or podcasts. I think it is a wide universe to explore. Not responding to that demand would be not seeing an opportunity to create something greater. We are in an open beta stage, the platform is still under development. If 20 users tell us that they want to upload a podcast in a month, we will evaluate it and probably, sooner or later, it will be a function.

And what are the next steps? Not only in the coming months will they contemplate the proposals of the users. There are many resources that were left out in the first stage and now the possibility of adding them is open. Although they do not have a specific date to end the beta stage, they estimate that it will be in the middle of the year, but “it does not mean that you can no longer enter and not all the features are available.”

Axel thinks about the next instance and says that the main objective is that “it is a place where nobody can feel bad, that nobody attacks another and that gives voice to any person”. For the closing, Germán adds that “expectations are positive, we want that to continue growing, we want, in addition to making the site work, we want to create a healthy community. With Veta being a healthy place, I would already agree ”.

Users can now register and generate their user in https://www.veta.ar

“My dream is that we take Isurus to a Major,” said Tom1jed, new Counter Strike player from SharkDiablo, Overwatch 2 and more: all the news presented on the first day of BlizzConline