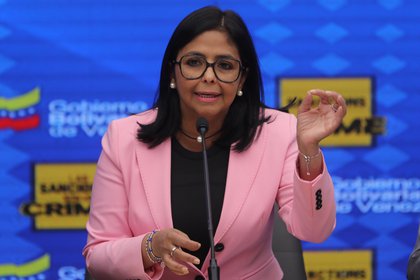 Caracas, Nov 18 . .- Venezuela reported this Wednesday 2 new deaths from causes related to covid-19, and the total number of deaths from this disease rose to 860 in the Caribbean country, reported the executive vice president, Delcy Rodríguez.
According to the official, the two deaths occurred in the state of Mérida (west), a region that did not report new infections today.
Rodríguez also reported that this Wednesday 300 new cases of the SARS-CoV-2 coronavirus were detected, 224 of them community-based and 76 “international,” as the Government of Nicolás Maduro calls migrants returning from countries in the region due to the crisis that has caused the pandemic.
The Venezuelan capital, Caracas, was the region that reported the most new cases, with 42.
The states of Carabobo and Guárico, with 40 and 39 infections, respectively, were the other regions most affected.
With these data, and 248 days after the first case was detected, the total number of infections in Venezuela amounts to 98,350, of which only 4,100 remain active, according to the part offered by the Venezuelan Government.
Venezuela detected the first cases of SARS-CoV-2 last March, the same month that the government of President Nicolás Maduro ordered a “radical” quarantine and the closure of borders in an attempt to stop the infections.
But in recent months, in Venezuela weeks of quarantine have been combined with others of “relaxation”, as has happened since last Monday, a measure that the Maduro government estimates will allow a necessary “respite” to the battered economy of the South American country.
In this sense, the president has said that this method, which he calls 7 + 7, has worked, and has estimated that if the low rate of infections that his Government reports is maintained, next December the quarantine could be lifted completely. .