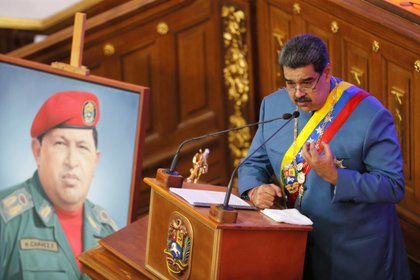 Nicolás Maduro delivered his annual address on the state of the nation during a special session of the National Assembly in Caracas on January 12, 2021. REUTERS / Manaure Quintero

The Nicolás Maduro regime is expanding the use of bank accounts in foreign currency, in the latest step towards dollarization of an economy decimated in recent years.

“It is authorizing the opening of accounts at all levels in convertible currencies, in dollars”said the dictator this Wednesday during an annual speech that, he says, is intended to render accounts of the management to the population.

As Venezuela’s economy contracted for the seventh consecutive year in 2020, the regime turned a blind eye to the increasing number of dollar transactions and relaxed the controls that restricted private business. Since this shift in focus, more than $ 2 billion in remittances have flowed into the Caribbean country and there are now abundant goods on offer for those with access to foreign currency.

Local banks can already offer accounts in US dollars, but transactions are limited due to the lack of a clearing system that allows electronic fund transfers between different banks. Maduro’s proposal would allow the widespread use of debit cards connected to these accounts.

Venezuelans will now be able to pay in bolivars with debit cards from their dollar accounts, Maduro pointed out, who also indicated that the dollarization of the economy is a necessary and beneficial escape valve for economic life.

Since an interannual inflation of 1,858% is estimated, bolivar bills lose value in record time, increasing the need for digital payments and currencies to facilitate transactions. 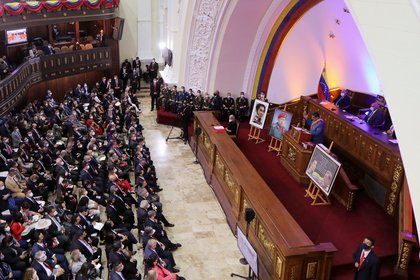 WITH FINANCE ON THE GROUND

Venezuela receives 98.6% less income than in 2013, the year Maduro took over the executive, according to the dictator himself in his annual message. The report is full of economic data that reveals the ruin in which the country finds itself.

In his rendering of accounts on the exercise of power in 2020, he also admitted that unemployment and poverty grew, although the margins presented are much lower than non-governmental estimates, that illustrate that the vast majority of Venezuelans live in misery.

Maduro also acknowledged that the pumping of the state oil company PDVSA fell by 69% between 2015 and 2019, a phenomenon that led the Caribbean country to lose revenues in the order of 102.5 billion dollars. 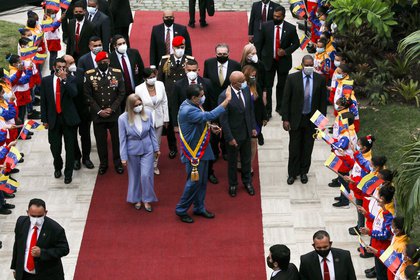 Maduro arrived at the event accompanied by the first lady and legislator Cilia Flores and the new president of the National Assembly of Venezuela, the former Chavista minister Jorge Rodríguez (REUTERS / Manaure Quintero)

The dictator also presented a graph in which he claimed that by March 2015 Venezuela was producing 2,817,000 barrels of oil per day.

It did not indicate how many barrels per day PDVSA currently produces, but it did indicate that the country stopped pumping more than 2,153 million barrels of crude “for refining and export.”

According to data from the Organization of the Petroleum Exporting Countries (OPEC), which cites secondary sources, the country pumped 339,000 barrels of crude daily last August.

“General poverty by 17% and extreme poverty by 4%, if it is about housing, health, education, etc. needs, “continued the governor, to later clarify that the results of these indicators in 2020 are not yet available.

These data contrast strongly with those of the National Survey of Living Conditions (Encovi), carried out by the most important universities in the country, and which placed the indicator for that year at 96% poverty in general and 79.3% extreme poverty. . 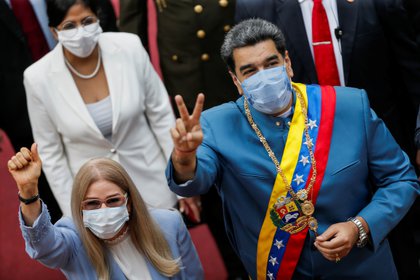 Maduro and his wife, Cilia Flores, arriving at the National Assembly building for the annual speech on the state of the nation on January 12, 2021. REUTERS / Manaure Quintero

IMPACT OF THE PANDEMIC

Apart from the economic data, Maduro congratulated himself for more than an hour for the handling he has given to the covid-19 pandemic in the country, considering that his Executive took measures that allowed today to have one of the lowest official balances in the country. world, in terms of deaths from this disease.

“We were the first country in the world and I was the first president in the world to wear the mask. That has been one of our best weapons in this battle we have fought ”, he said.

In addition, he highlighted the “success” of the method he has applied to “boost” the economy in the midst of the pandemic and which he has called “7 + 7”, a system that he plans to propose to the World Health Organization (WHO) to let it be replicated in the world.

To top it off, announced that “very soon” 10 million doses of the Russian vaccine Sputnik V will arrive in Venezuela to prevent the coronavirus, a pandemic that, according to official figures, has left 117,299 infections and 1,078 deaths in the country in more than 300 days.

With information from Bloomberg and .

More on this topic:

About 300 indigenous Venezuelans migrated to Brazil in the first days of 2021: “They arrive walking and hungry”

A former minister of Hugo Chávez recounted how corruption grew within the Venezuelan regime: “Maduro is a puppet at the mercy of a mafia cartel”