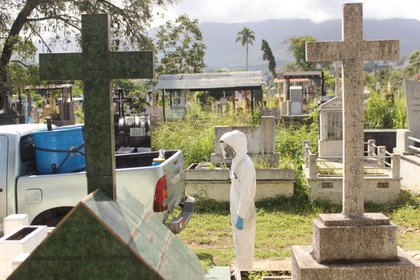 Members of Civil Defense and gravediggers from the San Cristobal municipal cemetery bury a person who died from the coronavirus, on July 15, 2020, in San Cristóbal (Venezuela). . / Johnny Parra / Archive

Caracas, Feb 18 . .- Venezuela registered six new deaths this Thursday due to covid-19, a disease that has so far left a total of 1,303 dead in the Caribbean country, reported the executive vice president, Delcy Rodríguez.
Among the deceased, the official said, there are three men aged between 66 and 86 years, as well as three women between 62 and 80 years.
Rodríguez explained through his account on the social network Twitter that these deaths were computed in the states of Aragua and Miranda, both close to Caracas, as well as in the Zulia state oil company, located in the west and bordering Colombia.
The presidential commission that monitors the coronavirus pandemic in Venezuela also counted 462 new infections in the last 24 hours, of which 448 were produced by community transmission within the country’s regions, mainly in the Andean state of Mérida, which added 95 cases.
The rest of the infections, the vice president continued, are “imported” patients, that is, people who arrived in the South American country in the last hours, although they did not clarify their origins.
Thus, 340 days after Venezuela detected the first case of covid-19, the country this Thursday reaches a total of 134,781 registered infections, of which 94% are recovered patients, always according to the government balance.
VACCINATION BEGINS
Venezuela began this Thursday the first stage of its immunization against covid-19, with the inoculation of the first doses of the Russian Sputnik V vaccine to health personnel, in a day to which only the state channel had access.
“We are very happy,” Rodríguez said after the public channel Venezolana de Televisión (VTV) broadcast images showing the vaccination of a woman. “We pay our tribute in this way to all health personnel (…), the time has come for us to take care of them,” added the official.
The vaccination process begins after the first 100,000 doses of the Sputnik V vaccine arrived in Venezuela last Saturday.
Rodríguez said that the process does not take more than three minutes, since a ratio of 20 vaccines per hour is estimated.
In addition, he indicated that the Government of Nicolás Maduro hopes to have vaccinated 70% of the population before the end of the year and asserted that this rate offers “herd immunity.”