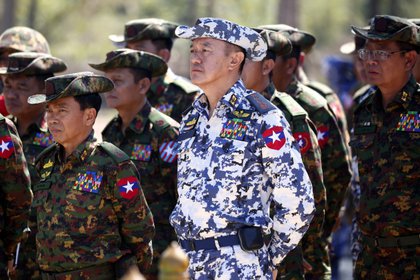 Washington, Feb 22 . .- The United States Government imposed sanctions on Monday against two members of the Burma military junta, who join those of ten other officers punished by Washington at the beginning of the month.
The two new sanctions by the United States are General Maung Maung Kyaw and Lieutenant General Moe Myint Tun, according to a statement from the Treasury Department.
The sanctions block the assets that these two soldiers may have in the United States and prohibit eventual transactions with them.
In the statement, the United States warned that it will continue to work hand in hand with its allies in the region and in the world “to put pressure on the Burmese military and police.”
“The military,” he added, “must reverse their actions and urgently restore the democratically elected government in Burma, or the Treasury Department will not hesitate to take further action.”
This Monday’s sanctions are in addition to those imposed on February 11 against 10 officers, including the commander of the Burmese Armed Forces, General Min Aung Hlaing, who led the military uprising and the deposition of the elected government of Aung San Suu Kyi.
Hlaing chairs the military junta that has ruled Burma since the coup.
Back then, US Treasury Secretary Janet Yellen warned that Washington could take additional action: “If there is more violence against peaceful protesters, the Armed Forces will realize that today’s sanctions are only the first”.
At the same time, the Secretary of State, Antony Blinken, warned that the United States will not remain “idly” in the face of the uprising.
On February 1, Burma’s military overthrew the democratic government, detained civilian leaders, blocked internet access, and suspended flights.
The Armed Forces had already ruled Burma between 1962 and 2011, when a controlled transition to democracy began, and in 2015 the National League for Democracy (NLD) party, led by Nobel Peace Prize winner Suu Kyi, came to power. .