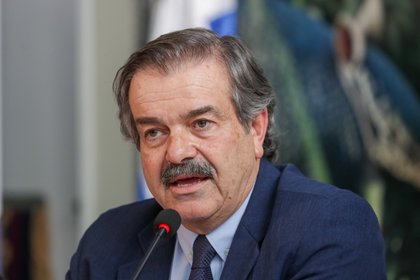 Montevideo, Jan 14 . .- Uruguay will reinforce controls in its refrigerators to prevent the presence of covid-19 in meat exported to China, its main market, after detecting outbreaks in two establishments.
This was reported this Thursday during a virtual appearance by the Ministers of Livestock, Agriculture and Fisheries, Carlos María Uriarte; Public Health, Daniel Salinas; and Foreign Relations, Francisco Bustillo, who detailed the measures that the country is taking to guarantee the safety of its food.
Uriarte pointed out that Uruguay is moving towards a safe production chain “after almost 10 months” in being one of the few who wielded “with pride” that its chains were free of COVID-19 and that later its protocols were violated in two cold stores.
The minister thus announced that, together with the Foreign Ministry, the Ministry of Public Health, the Ministry of Labor and the National Meat Institute (INAC), a series of strategies was developed to combat infections in the industry and comply with the “very tough “demands from the Chinese government.
“What we are trying to do is prevent the outbreak from appearing, anticipate and be able to avoid having to suspend a plant and, therefore, save its activity and the generation of work,” he said and stressed that a key measure will be the ” sanitary void “of the establishments.
Uriarte explained that, if cases are detected in a refrigerator – as happened in two centers already suspended and that, without new cases since December 17, they are awaiting the Chinese audits for the reopening -, the premises will be disinfected to work with new staff outside the focus.
“This is the innovative concept that we have been applying for some time and that has given very good results to stop that explosion that we experienced at the beginning and put us in a more manageable direction,” he stressed.
Salinas, meanwhile, said that the outbreaks detected were, as in the majority of the population, intrafamily and stressed that although science does not ensure that traces of viruses in food can infect, China puts a “high bar” and its demands are exemplary to avoid new outbreaks.
In addition, he stressed that distance and mask measures should be reinforced in common areas of workstations such as changing rooms and dining rooms.
For his part, Bustillo highlighted the smooth collaboration with the Chinese customs authorities and diplomatic cooperation.
Asked about Uruguay’s high tariffs to access China compared to other competitors, the foreign minister stressed that work is being done on it but that the country should “congratulate itself” on “not losing markets” in the current context of crisis.